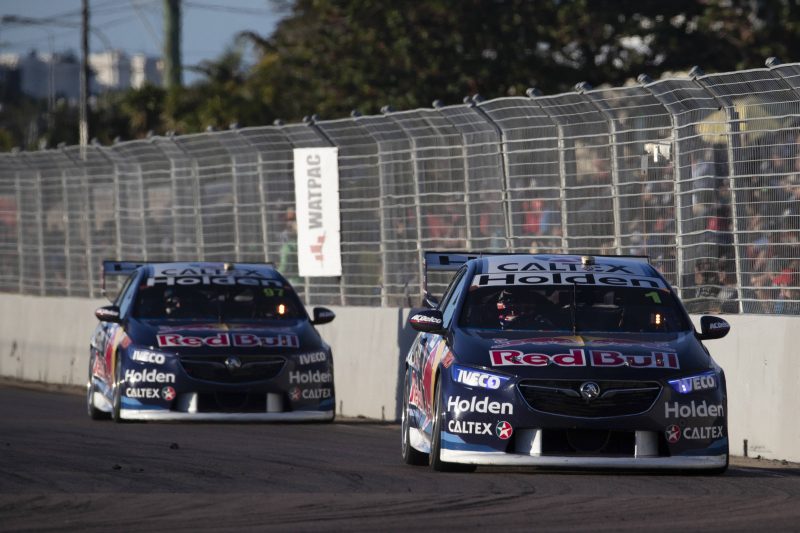 Triple Eight can ill-afford to let complacency creep in despite a momentum shifting Townsville weekend that saw the squad make strides in addressing its qualifying weaknesses.

The Brisbane powerhouse returned to the top step of the podium by recorded back-to-back one-two finishes shared between drivers Jamie Whincup and Shane van Gisbergen.

It was the squad’s first one-two finish with the new ZB Commodore since its debut at the start of the year and the first win since Symmons Plains in April.

Key to Triple Eight’s domination was a rapid improvement in qualifying that team owner Roland Dane felt was hindering his squad from winning races.

All three entries qualified inside the top six in the two races at Townsville with van Gisbergen and Whincup sharing the front row for Sunday’s Race 18.

Since its last victory the squad had netted only eight top five grid starts and one pole position across its cars.

While relieved to see progress in that crucial area, team manager Mark Dutton admits there is still plenty of work ahead and expects the following Coates Hire Ipswich SuperSprint (July 20-22) to be a challenge.

“We were stronger this weekend, that gives you confidence for QR, but by no means do you think ‘job done, we’re on the right path, we’re home and hosed’,” said Dutton.

“It’s not that at all. QR will be a tough challenge, the rest of the field has had a lot of success there and obviously test there as well.

“We’ve got a good track record here, so we’re not getting ahead of ourselves.

“There have been times when we thought we should be closer than what the timesheets had shown. And you can always look and say ‘we could have put this eclectic run together, but everyone’s got that story.

“To actually put it on the line and get the results (in qualifying) we knew were in the car, to actually extract them, was extremely satisfying.

“Momentum is massive (for the title race). Mostly in qualifying momentum is the big one.

“We’ve still maintained good race pace, but when you’re coming back through the field you can only achieve podiums and maybe the odd win, instead of qualifying well and leading from the front.

“We’re learning things, but definitely the momentum is starting to pay off.”

The next stop on the calendar will provide an intriguing instalment with Queensland Raceway the official test track for the team and its title rivals Shell V-Power Racing.

“It’s a tough one. I’ve always said your test track is actually a bit off your normal sequence,” added Dutton.

“People quite often stay at home instead of at hotels; you get out of your routine a bit.

“We’ve got confidence out of what we achieved this weekend for our team, but by no means are we going to be complacent. ‘That’s an evil word.”

Triple Eight has taken over the lead in teams’ standings following its Townsville success with a 69 point margin over DJR Team Penske.