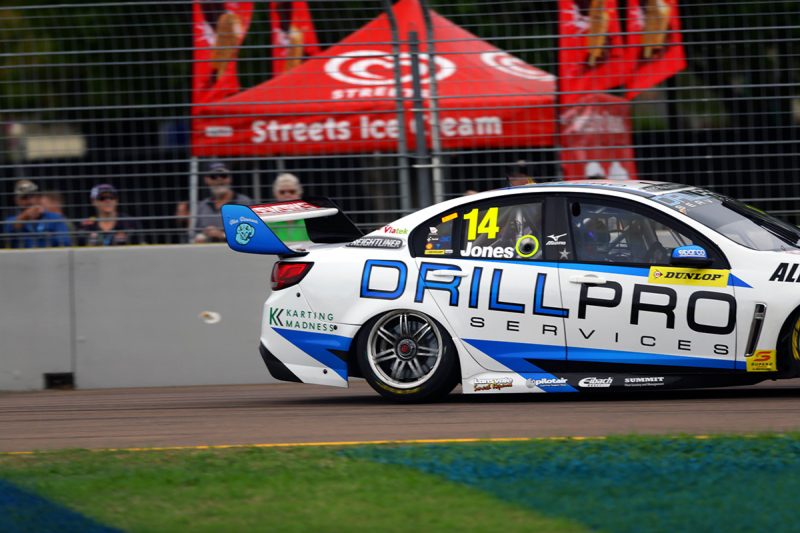 Macauley Jones says that there are a number of positives to take away from his Townsville Super2 weekend despite ‘heartbreaking’ twin failures which have ruined his title hopes.

Jones was leading by around a second on the Saturday when a damper shaft-related failure in his Brad Jones Racing Commodore cruelled his race on Lap 9.

History repeated a day later when he was two seconds clear of eventual winner Chris Pither as the right-rear suspension gave way again on Lap 11.

Jones had qualified fastest for the first time in Super2 ahead of Race 1 and fell only 0.0435s of doubling his Armor All Pole tally on the Sunday. 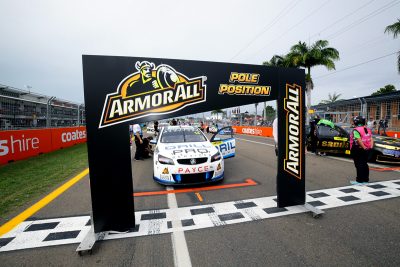 A maiden Armor All Pole Position is one reason for optimism

The 23-year-old pointed to his one-lap and race pace, having led every lap prior to the failures, as reasons to be positive despite leaving Round 4 of the series all but emptyhanded.

“It’s very disappointing, it’s kind of the weekend that could have been,” Jones told Speedcafe.com.

“We lost the championship pretty much on Saturday, then Sunday to top it off, so it’s pretty gutting for the team.

“We were showing some real pace and there are a lot of positives to take away from the weekend; first pole position in the category, which is mega for the whole team really.

“We’ve worked very hard to improve the car for qualifying and the team really got that for this weekend, and we showed real race pace.

“It’s just very disappointing, having the failure on Saturday and then to pretty much repeat the exact same circumstance on Sunday.

“It’s pretty heartbreaking but we’ll build on it and we’ll move forward.”

Father and team owner Brad admitted at the time of the second failure that he was “gutted” and Macauley confirmed that he took the blow just as hard.

“I don’t think he had many words for me or for himself,” recalled Jones.

“He sort of said ‘sorry’, not that I think it was his fault at all.

“It’s just that he’s riding along with me and sometimes it’s all you can say, so he didn’t have a whole lot to say, to be honest.”

Jones had arrived in North Queensland in fourth position in the series, 150 points behind leader Paul Dumbrell.

Assuming the rest of the finishing order remained, a clean sweep would have seen the deficit trimmed to 108 points.

Instead, the DNF and 22nd position finish (last of the starters) that he did record caused it to balloon to 387 with three rounds remaining.

“I think that’s one of the most disappointing parts about it,” explained Jones.

“I think we were making sure we were being consistent all year and making sure to finish races, and leaving Townsville with (virtually) no points when we could have had quite a lot of points is pretty hard to take.

“We just have to go to the next one and just carry the momentum that we’ve got going forward.”

Jones says that the team will be looking into the root cause of the issue, which did not manifest itself in any of BJR’s three Virgin Australia Supercars Championship entries across a combined 417 racing laps in Townsville despite running largely similar rear suspension packages.

While the Dunlop Super2 Series has another long break before Round 5 at Sandown and the Bathurst 250, which Jones won in 2017, the Albury racer will enjoy seat time at two of the next three Supercars events.

He will run in the Additional Drivers session at the Coates Hire Ipswich SuperSprint (July 20-22) before a second wildcard start at the OTR SuperSprint – The Bend (August 24-26), in preparation for his Pirtek Enduro Cup co-drive with Nick Percat.