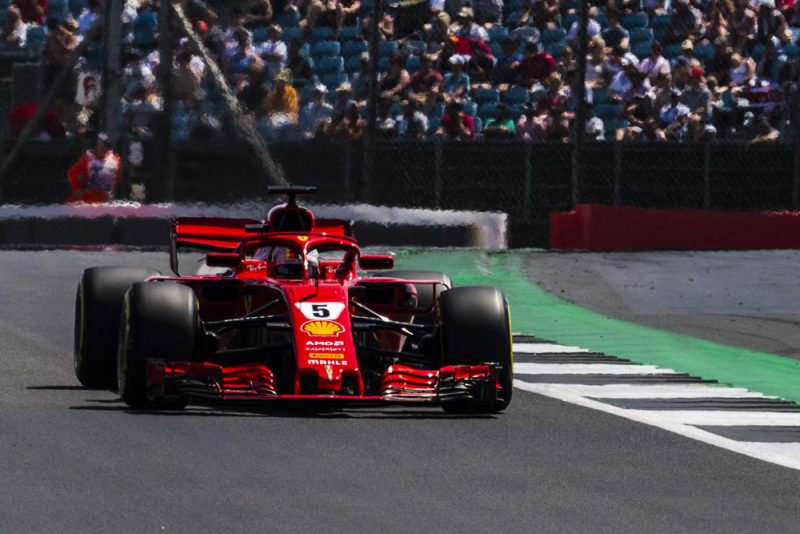 Sebastian Vettel has emerged triumphant after a thrilling four-way battle for the lead in the closing stages of the British Grand Prix at Silverstone.

Taking the lead at the start, Vettel commanded much of the race before two late Safety Cars turned the race on its head.

Rolling the dice with strategy, Ferrari pitted both Vettel and Kimi Raikkonen while Mercedes left its two cars out.

It prompted a thrilling battle in the closing laps, Vettel finally gaining the upper hand after several attempts on race leader Bottas.

Struggling for grip, Bottas dropped to fourth at the flag behind Hamilton and Raikkonen, with Ricciardo in fifth.

Vettel rocketed into the lead from the start while Hamliton found himself pointing the wrong way after being tagged by Raikkonen.

It dropped the pole sitter to the back of the pack as Bottas found himself second ahead of Verstappen and Ricciardo while Raikkonen fell behind the Red Bulls.

Raikkonen quickly put a move on Ricciardo heading into Copse to climb back to fourth though his progress was halted when he reached his first stop, Stewards dishing out a 10-second penalty to the Finn for spinning Hamilton.

Sergio Perez also found himself facing the wrong way at Abbey on the opening lap, the Force India driver lucky to be avoided by the two Williams as they joined the race.

With Lance Stroll having not set a time in qualifying, and Sergey Sirotkin having qualified slowest of those who did manage a lap, Williams opted to start both cars from the pit lane after changing the rear wing on both cars.

Brendon Hartley missed the start after his car failed to start when fired up to head to the grid.

It triggered frantic scenes in the Toro Rosso garage, the team taking off the floor to repair the car before the New Zealander was finally retired from the race without ever taking part.

Hamilton clawed his way back into the top ten 10 six laps, by which time he’d fallen more than 24 seconds behind Vettel, and by Lap 11 the Englishman had cleared the midfield and was in pursuit of Ricciardo in fifth.

Raikkonen stopped after 14 laps, Ferrari choosing not to change his front wing despite complaints of severe understeer from the 2007 world champion.

Charles Leclerc was forced out of the race immediately after his stop on Lap 19, pulling the Sauber off at Village with a loose wheel.

Vettel stopped from the lead with a blister on the left front tyre on his Ferrari after 21 laps, rejoining just as Raikkonen ran off the road while pursuing Ricciardo for fifth.

It saw Bottas take over in the lead for lap before he too stopped, handing the race back to Vettel and temporarily promoting Hamilton to second.

Mercedes quickly reversed Hamilton and Bottas on track as their two drivers ran different strategies halfway through the race, while Hamilton eventually boxed after 25 laps, taking on a fresh set of medium compound tyres and rejoining behind Raikkonen in sixth.

Red Bull stopped Ricciardo for a second time after 31 laps, taking on a set of soft compound tyres to run out the 52 lap race.

It was a move designed to gain track position over Raikkonen later in the race, the Ferrari driver losing chunks of time to the hard charging Hamilton who recorded a string of fastest laps following his pit stop.

A heavy crash for Marcus Ericsson saw the Sauber buried in the tyre barrier at Abbey, immediately triggering the safety car on Lap 34.

Ferrari took the opportunity to stop Vettel from the lead, the German falling behind Bottas as Verstappen and Raikkonen also took to the lane.

Mercedes chose not to stop either car, a move which saw Hamilton promoted to third and Bottas the lead.

The race restarted on Lap 38, Verstappen defending fourth forcefully from Raikkonen down the Wellington Straight but the Ferrari driver elbowed his way though.

Verstappen immediately fought back, retaking the position at Luffield.

Further back Romain Grosjean and Carlos Sainz came together at Copse, drawing the Safety Car back out of pit lane.

Sainz had attempted a move around the outside of the Haas driver, the pair touching and firing off the circuit and into the tyre barrier.

Vettel and Bottas narrowly avoided contact at the restart on Lap 42, the Ferrari driver having to back out of a move at Brooklands.

Raikkonen found his way through on Verstappen on Lap 43, out-dragging the Red Bull down the Hangar Straight.

A thrilling lead battle then follwed between Vettel and Bottas, the Mercedes driver defending valiantly through Brooklands, Luffield and Copse as the Ferrari climbed all over the back of the race leader.

Their battled allowed Hamilton and Raikkonen to close the gap to make for a four-way battle as the race moved into its closing stages.

Vettel eventually made the move stick on Bottas on Lap 47, diving down the inside at Brooklands to take the apex.

The German then skipped clear as Bottas fell into the clutches of Hamilton, who mirrored Vettel’s move a lap later to take second from his team-mate.

Raikkonen also found a way through, driving by the Mercedes down the Wellington straight to push Bottas off the podium.

Verstappen lost fifth after he spun at Club, allowing Ricciardo through as the Dutchman retired half a lap later with the car stuck in fourth gear.

Nico Hulkenberg was the sole Renault to finish, coming home sixth ahead of Esteban Ocon, Fernando Alonso, Kevin Magnussen, and Pierre Gasly rounding out the top 10.