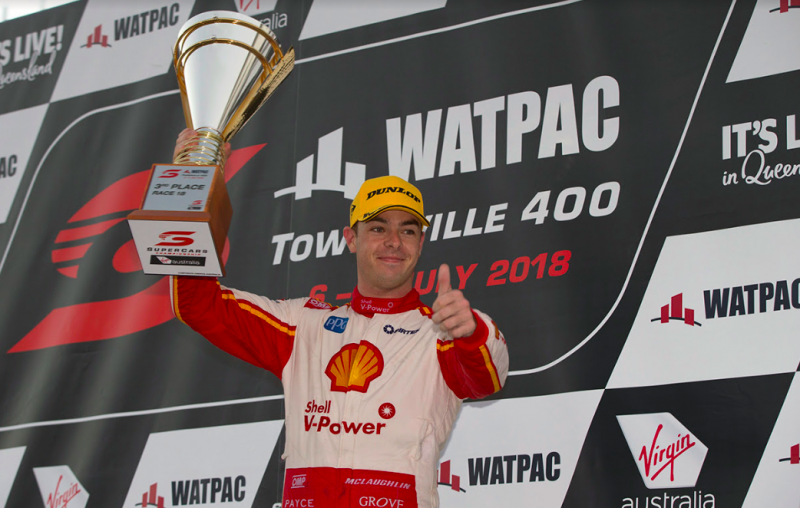 Scott McLaughlin has hailed the team effort to salvage a podium from 11th on the opening lap in Townsville on a day in which he believed his driving ‘sucked’.

The championship leader had qualified only seventh, just his second time off the front row in 10 races, and ceded another four positions on the opening lap.

McLaughlin’s Shell V-Power Racing Falcon was the first car into the pit lane after 13 laps of Race 18 of the Supercars Championship.

A significantly shorter fuel fill than the front-runners promoted the New Zealander to second position once the first pit stop cycle had completed, although he was picked off by eventual race winner Shane van Gisbergen a few laps later.

With clear track, however, McLaughlin made up enough time to emerge in third position once the final pit stops had played out.

A late Safety Car brought van Gisbergen and Jamie Whincup back to the field but a combination of lapped traffic and the pace of the Red Bull HRT Commodores meant that Car #17 remained third until the chequered flag.

McLaughlin, who was provisionally second on the grid before the Armor All Top 10 Shootout, was content to pick up a second podium in as many days given Triple Eight’s strength over the weekend.

He also praised the team’s strategic work to help dig him out of a hole.

“I think two thirds for us (considering) the pace that these guys (van Gisbergen, Whincup) have shown is I think really good for us,” explained McLaughlin.

“I think I was very disappointed with the Top 10 Shootout today, I just made a couple of little mistakes and the car was very loose.

“We just sort of tuned a bit too much one way, so that hurt us.

“Starting today’s race, it wasn’t the best start from my end.

“To be honest my driving just sucked.

“The team really pulled me through, gave me a great strategy, great tyre life, and I was able to just punch in clear air.

“When I’m having a bad day they’re always behind me, which is all I can ask.”

Despite his 25-year-old driver’s less than complimentary self-assessment, Story said that the ground made up when Car #17 was released on its second tyre set was pivotal in the final outcome.

“His race was the start of that second stint,” Story told Speedcafe.com.

“He went out there and did five or six laps in a row at quali pace and managed to hang onto the tyre for the rest of it and just did a terrific job.

“Our race pace was certainly stronger (on Sunday) than what it was (on Saturday) and that’s a result of the engineers doing plenty of hard work overnight.

“Quali pace was a bit disappointing and it’s not normally where we like to find ourselves but overall a lot to take away from this weekend and if a couple of podiums is a bad weekend, that’s not too bad at all.”

While van Gisbergen and Whincup each picked up a first and second placing at the Watpac Townsville 400, McLaughlin’s twin podiums keep him 131 points clear at the top of the Virgin Australia Supercars Championship table.

The season continues with the Coates Hire Ipswich SuperSprint, the ninth event of 16, on July 20-22.