Hinchcliffe wins in Iowa as Newgarden gets trapped by Caution

Hinchcliffe wins in Iowa as Newgarden gets trapped by Caution 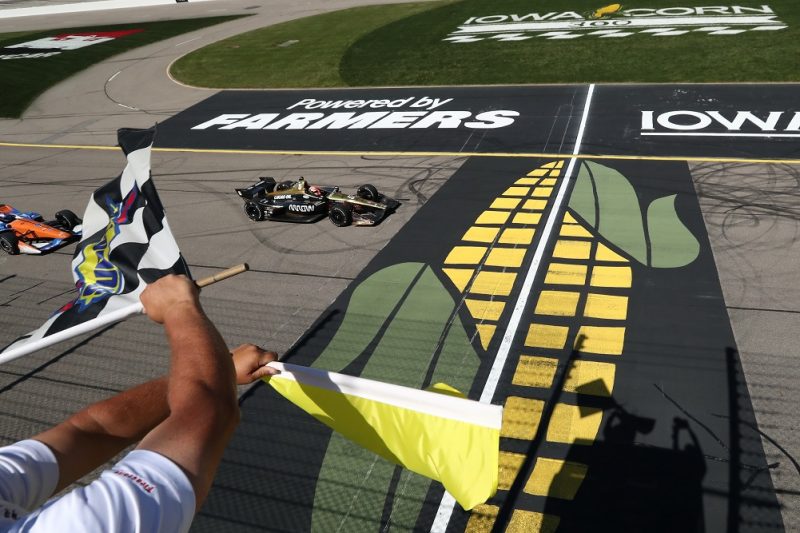 James Hinchcliffe has won the Iowa Corn 300 as Josef Newgarden gave up a chance to challenge when he pitted during a late Caution from which the race did not restart.

The race was a fight between those two for much of the afternoon and it was Hinchcliffe in the #5 Schmidt Peterson Honda who had the upper hand when the race was neutralised for the final time on Lap 294 of 300.

Newgarden and Robert Wickens (#6 Schmidt Peterson Honda), who were running second and third respectively, filed into pit lane but the green flag never appeared and they ultimately finished fourth and fifth.

Hinchcliffe had only qualified 11th but made rapid progress during the first stint to run second to Newgarden, albeit eight seconds in arrears, on Lap 40.

Power, who started from pole in the #12 Team Penske Chevrolet, ran third but dropped back to 12th when he took his first pit stop later than most on Lap 79.

Newgarden waited until Lap 80 to pit the #1 Team Penske Chevrolet, four laps later than Hinchcliffe, but still led by over four seconds.

The margin between the top two remained fairly steady through the second stint of the race but Power dropped off the lead lap on Lap 112.

Zach Veach set off the second cycle of pit stops when he hit the wall and caused the first Caution on Lap 139.

Only the top four of Newgarden, Hinchcliffe, Pigot, and Sato had been on the lead lap at that point but another six joined them during the yellow, including Power in seventh and Wickens in eighth.

Hinchcliffe prevailed over Pigot in a brief duel for second position after the race restarted, before the latter lost a position to Sato on Lap 171.

The Japanese driver put on a big move at Turn 3/Turn 4, during which his #30 Rahal Letterman Lanigan Honda nearly made side-to-side contact with the #21 Ed Carpenter Racing Chevrolet.

The top two had cleared out by that stage, with Newgarden leading fairly comfortably, before more pit stops from Lap 221.

Pigot was the first of the top four into the lane and he jumped two positions in the cycle, relegating Hinchcliffe to third, from Wickens and Sato.

Hinchcliffe re-passed Pigot on Lap 251, when Newgarden was just over a second up the road.

However, the defending Verizon IndyCar Series champion came up on team-mate Power again and as the Australian tried to stay on the lead lap, Hinchcliffe took the opportunity to go underneath Car #1 and lead for the first time on Lap 256.

Wickens got by Pigot on Lap 279 before the second and final Caution came for debris, caused when Sato touched Ed Carpenter as the pilot of the #20 Ed Carpenter Racing Chevrolet half-spun, with seven laps remaining.

When the green flag never came, Hinchcliffe was able to roll across the finish line for his first win of the season.

Scott Dixon could only manage to finish 12th in the #9 Chip Ganassi Honda, four laps down, but still leads the series by 33 points over Newgarden.

Ryan Hunter-Reay fell from second to fourth in the standings, swapping with Newgarden, after mechanical problems with the #28 Andretti Autosport Honda consigned him to 19th.

The IndyCar Series continues this weekend (July 13-15 local time) with the Honda Indy Toronto on the streets of the Canadian city.