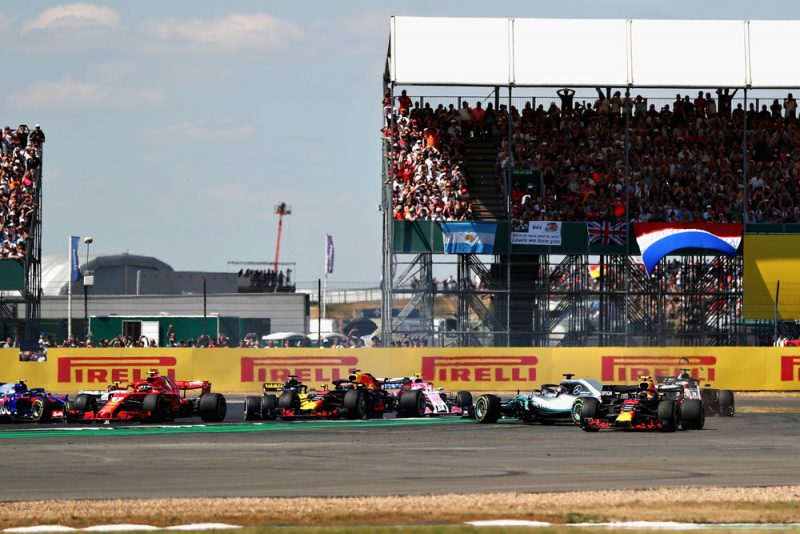 Ferrari drivers Sebastian Vettel and Kimi Raikkonen have dismissed claims they employed ‘interesting tactics’ against Lewis Hamilton at the start of the British Formula 1 Grand Prix at Silverstone.

Vettel raced into an early lead while Raikkonen made contact with the rear of Hamilton’s Mercedes at Village.

The impact turned the Englishman around and dropped him to last, forcing a stunning recovery drive that saw Hamilton claim second at the finish.

It’s the second time in three races that a Ferrari and Mercedes have tangled, with Vettel and Valtteri Bottas making contact at the start of the French Grand Prix.

Following the race an angry Hamilton insinuated there were untoward tactics at play.

“The team did an amazing job this weekend and we’ve got so much support but so much pressure for us all,” Hamilton said on the podium.

“Interesting tactics, I would say, from their side but we will do what we can to fight them and improve in the next races.”

In the post-race press conference the second place finisher elaborated.

“All I’d say is that it’s now two races that the Ferraris have taken out one of the Mercedes, and a five-second penalty and a 10 second penalty doesn’t appear to feel… ultimately it spoils the race,” he said.

“It’s a lot of points that ultimately Valtteri and I have lost in those two scenarios.

“I couldn’t see behind me but we’ve just to work hard to try to position ourselves better so that we are not exposed to the red cars – because who knows when that’s going to happen again.”

Vettel however was not buying into Hamilton’s accusations, labeling them ‘silly’ and ‘unnecessary’.

“Things can happen but I think it’s quite silly to think that anything that happened was deliberate, at least, I would struggle to be that precise, you know, to take somebody out,” responded Vettel.

“In France, I lost my wing so I screwed my race. I think it’s easy to obviously attack and have a great move and also easy to have an incident.

“I only saw it briefly on the monitor, I don’t think there was any intention and I find it a bit unnecessary to even go there.”

For his part in the clash, Raikkonen conceded he deserved a penalty.

“Obviously in the third corner I locked the wheel and I was behind the cars, so I ended up hitting Lewis in the rear corner, I oversteered, he spun, my bad, but that’s how it goes sometimes,” explained the Finn.

“It was my mistake, so that’s fine. I deserve it and took the 10 seconds and kept fighting. That’s how it goes.

“Funnily enough you start blaming us that we did it purposefully but he locked a wheel and unfortunately we touched and both paid the price for it and that’s how it goes sometimes,” he added.

“It’s easy to say after the couple of races that we’re suddenly doing something against them but we’ve been hit very many times ourselves so that’s how it goes unfortunately.”

Mercedes team boss Toto Wolff also weighed into the situation, suggesting the incident was either deliberate or incompetence.

“It’s a lot of constructor points. To word it in James Allison’s (Mercedes Technical Director) words, do you think it’s deliberate or incompetence? This leaves us with a judgement.”

As a result of the British Grand Prix Vettel has extended his championship lead to eight points over Hamilton.

F1 heads to Hockenheim for the German Grand Prix from July 20-22.