Van Gisbergen: ‘We can take them on’

Van Gisbergen: ‘We can take them on’ 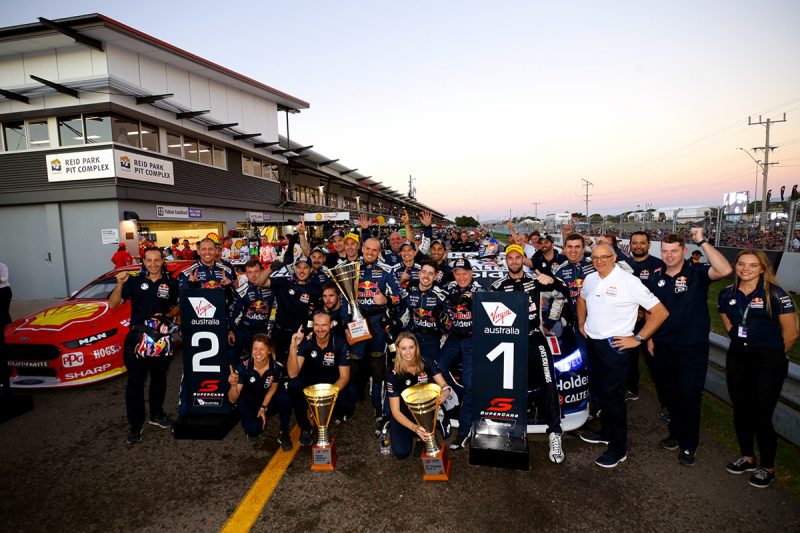 Shane van Gisbergen has cited Triple Eight’s weekend of dominance at the Watpac Townsville 400 as proof that his team can take on DJR Team Penske ‘head to head’.

The factory Holden squad has been handicapped by poor qualifying form of late, a point which team principal Roland Dane conceded after the previous event in Darwin.

In North Queensland, however, the Red Bull Commodores locked out the front row for Race 18 after Jamie Whincup had qualified second and van Gisbergen third a day earlier.

They went on to score dominant one-two finishes in both 200km races, the first won by Whincup and the second by van Gisbergen, while Craig Lowndes was fourth in each in the team’s Autobarn car.

Scott McLaughlin, on the other hand, qualified only seventh for Sunday’s encounter and fell to 11th in the opening corners.

He had to take a short fill to gain track position in the middle stint of the race and the #17 Shell Falcon came home a relatively distant third even after a late Safety Car compressed the field.

“As I said earlier in the week, I feel like we’ve been one of the fastest cars in racing.

“We’ve had to compromise the strategy to try get clear air and move through the pack.

“Started up front, raced with them yesterday (when McLaughlin qualified on pole), but it was Scotty’s turn to come from the back today and they did a good job salvaging the result.

“I feel like we can take them on head to head in racing and look forward to some battles in the next few races.”

The results represent a reversal in the Triple Eight versus DJRTP formline of recent events as the Banyo team struggled to understand the new-for-2018 ZB Commodore.

Van Gisbergen and Whincup ran effectively first and second for all but the first five laps, the latter gaining the ascendancy at the start of the middle stint before being overhauled by his team-mate.

Whincup was pleased with the performance notwithstanding a poor start which proved pivotal in his afternoon specifically.

However, he believes that the team must prove itself over coming events before Townsville can be considered a genuine turnaround.

“The story of my day was the start, just got a poor start, dropped back in the pack.

“I felt we were okay there in the second stint, tyres were sort of hanging in there but we had to go long due to the poor start.

“All in all, I couldn’t be happier.

“We keep chipping away and we’ve proved the cars are great but we’re not getting carried away; it’s (only) one round.

“If we can qualify well over three or four rounds then we can genuinely say we’re making gains.

“All in all, great weekend and I’m happy we have come away with second (in Race 18).”

The results saw van Gisbergen inch closer to McLaughlin at the top of the points table, now 131 points behind.

Whincup consolidated the fourth position which he took over from Lowndes a day earlier but is still 272 points further back.