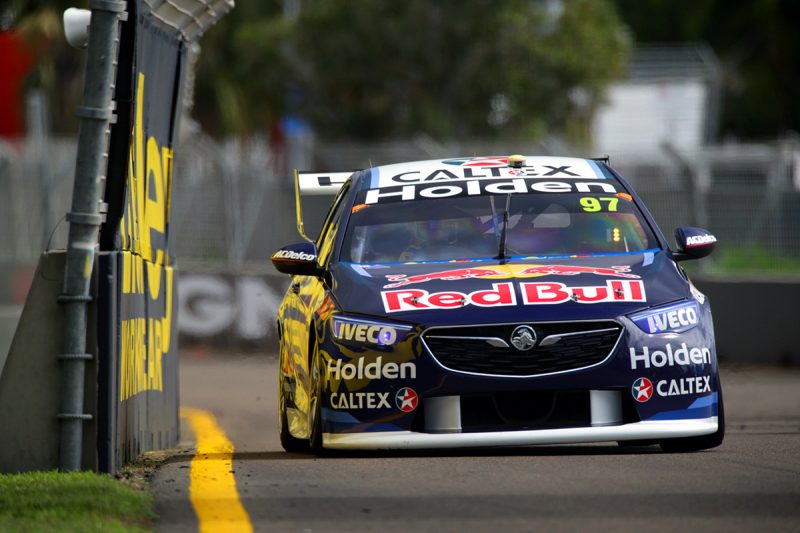 Shane van Gisbergen left it until very late to take a provisional Armor All Pole Position for Race 18 of the Supercars Championship in Townsville.

The 2016 champion went 0.1747s faster than Scott McLaughlin after the chequered flag while Race 17 winner Jamie Whincup was third-fastest.

Fabian Coulthard was the biggest name to miss the cut for the Top 10 Shootout and only qualified the #12 Shell V-Power FGX Falcon in 18th.

It seemed as though team-mate McLaughlin would be last out for the one-lap dash which will set the pointy end of the grid.

The #17 DJR Team Penske FGX Falcon was fastest ahead of the final runs with a 1:12.4335s and McLaughlin was sent for a final effort.

He didn’t improve, but fellow New Zealander van Gisbergen did as he clocked a 1:12.2588s in the #97 Triple Eight ZB Commodore, advancing himself from third to first.

“The work that has gone on the last few weeks, or the whole year, to make qualifying better has been good.

“Street circuits, we’re always good at so we need to keep that momentum going.

“(It’s) Awesome to finally get a good result; it’s not done yet, got the shootout to go, but the car felt amazing.”

McLaughlin said of his session, “The car is quite dance-y on the rear so it’s very slippery.

“I think the track is also very twitchy and stuff as well; we’ve tried to dial some turn into it, that’s what we lacked yesterday and have maybe gone a little bit too far.”

Whincup got up to second before dropping a position in the #1 Triple Eight ZB Commodore as a result of van Gisbergen’s time.

Rick Kelly (#15 Castrol Nissan Altima) stayed in pit lane for the final minutes and only lost positions to the two Red Bull cars as he ended up fourth.

David Reynolds ran slightly off-sequence at the end as he provisionally qualified fifth in the #9 Erebus Penrite ZB Commodore, and Will Davison (#230 Milwaukee FGX Falcon) claimed sixth having messed up the final sector after what looked like being a faster lap at the end.

James Courtney came from mid-field ahead of the final flings to make the shootout in seventh position in the #25 Mobil 1 Boost Mobile ZB Commodore, one position ahead of Craig Lowndes (#888 Autobarn ZB Commodore).

Anton De Pasquale starts from last this afternoon after burying the #99 Erebus Motorsport ZB Commodore in the tyre wall at Turn 3 on his first flying lap, causing a red flag inside the first four minutes.

“Obviously it’s a mistake on my own so I’ve got to take one on the chin and try to work out this afternoon,” said the rookie.

“It will be a real long arvo starting from the back. I think my first sector was good and then didn’t make the end of the lap, so we’ll see what we have and hopefully have a good race.”

The starting grid for Race 18 of the Virgin Australia Supercars Championship will be finalised with an Armor All Top 10 Shootout at 1355 local time/AEST.