T8 pulls off a double one-two in Townsville

T8 pulls off a double one-two in Townsville 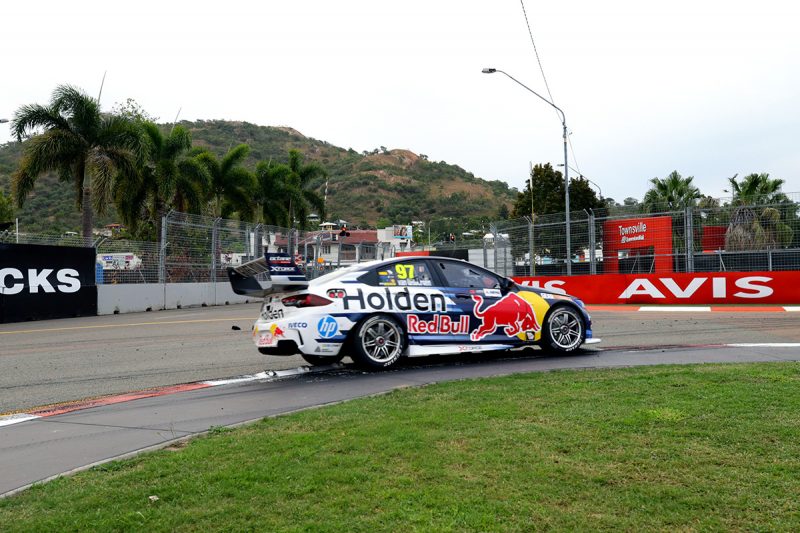 Triple Eight has achieved a one-two for the second day in a row at the Watpac Townsville 400 but this time Shane van Gisbergen headed Jamie Whincup home.

Whincup looked like marching away with the race after the first pit stops cycle but was run down by van Gisbergen later in the middle stint and the New Zealander eventually took victory despite a late Safety Car.

But for a reversal of the top two, the Race 17 top four was repeated in Race 18 as Scott McLaughlin and the third Triple Eight entry of Craig Lowndes finished third and fourth respectively.

The Red Bull Holden Racing Team cars had locked out the front row and while van Gisbergen was away smartly, Whincup dropped two positions off the grid.

Whincup had made up those positions inside the first five laps, when van Gisbergen was nearly two seconds up the road, and that margin continued to grow until Lap 7.

Around 0.7s separated them when Whincup pitted at the end of Lap 18, but the leader waited another six laps to take service for the first time.

Van Gisbergen rejoined in what was third position when the cycle had completed but had filled slightly longer than Whincup and significantly more than McLaughlin, who had split them.

He passed his New Zealand compatriot on Lap 28 and set about erasing the 5.8s deficit to the #1 ZB Commodore.

Whincup hit traffic in the form of Tim Blanchard on Lap 43, hastening the inevitable as he became easy pickings for van Gisbergen at Turn 11.

The defending Supercars champion pitted five laps later, by which time van Gisbergen had put three seconds on him.

The #97 ZB Commodore was into the lane next time around and while van Gisbergen was delayed slightly in exiting his pit box by the presence of Garth Tander (#33 Wilson Security ZB Commodore), he resumed 2.5s ahead of Whincup.

That gap had crept up to around 3.3s when the Safety Car was called on Lap 62 for a shunt involving Michael Caruso and Anton De Pasquale.

Whincup went with his team-mate when the race restarted with five laps remaining but couldn’t fashion a move and 0.7822s split the pair at the chequered flag.

The win is van Gisbergen’s first since he swept the season-opener in Adelaide.

“Thanks to the guys and girls, Red Bull Holden Racing Team, our cars have been awesome all weekend.

“Really cool and a good personal day for the 97 crew, turned our car around in qualifying and the race and came out on top.

Whincup lamented has start and an apparent steering issue with his car but backed up van Gisbergen’s sentiments about the team performance.

“Couldn’t be happier for the team; fantastic result,” he said.

“Car 1’s day, just poor start and that put us behind the eight-ball.

“I think I had something bent in the front end, the kerbs are really aggressive here, so I think I bent something.

“(The race) was awesome, there were no team orders, no criticism at the end; I pushed him hard.

“If there was a gap I would have taken it, but he drove unbelievably well.”

McLaughlin’s podium finish was something of a salvage job after the #17 Shell V-Power FGX Falcon lost four positions to run 11th at the end of Lap 1.

An initial short-fill gave the championship leader track position and he spent the remainder of the race as the best of the rest.

“All the guys and girls and crew gave me an absolutely awesome strategy, the tyre life was fantastic,” recounted McLaughlin.

“Just sucks I probably didn’t get the best start and lost a few places where we had a really fast car.

Lowndes (#888 Autobarn ZB Commodore) closed up to the championship leader before the Safety Car but he too could not advance his position in the dying laps.

Chaz Mostert found a turn of pace late in the afternoon to pass David Reynolds with three laps to go and bring the #55 Supercheap Auto FGX Falcon home in fifth position.

Caruso walked away from a battered #23 Drive Nissan Altima after he was punted into the infield tyre barrier as De Pasquale attempted a pass on the run to Turn 11.

The Nissan Motorsport driver moved to driver’s right to try and block the move but copped a hit as the rookie shifted back to the left and attempted to go deep under brakes in the #99 Erebus ZB Commodore.

De Pasquale finished 18th but the incident will go to a post-race investigation.

Will Davison’s afternoon ended in the tyre wall at Turn 6 after contact with James Golding (#34 Garry Rogers ZB Commodore) at turn-in sent the #230 Milwaukee FGX Falcon careering off on the third-last lap.

McLaughlin’s lead in the standings is now 131 points over van Gisbergen.

The Virgin Australia Supercars Championship stays in Queensland for the Coates Hire Ipswich SuperSprint in a fortnight’s time (July 20-22).