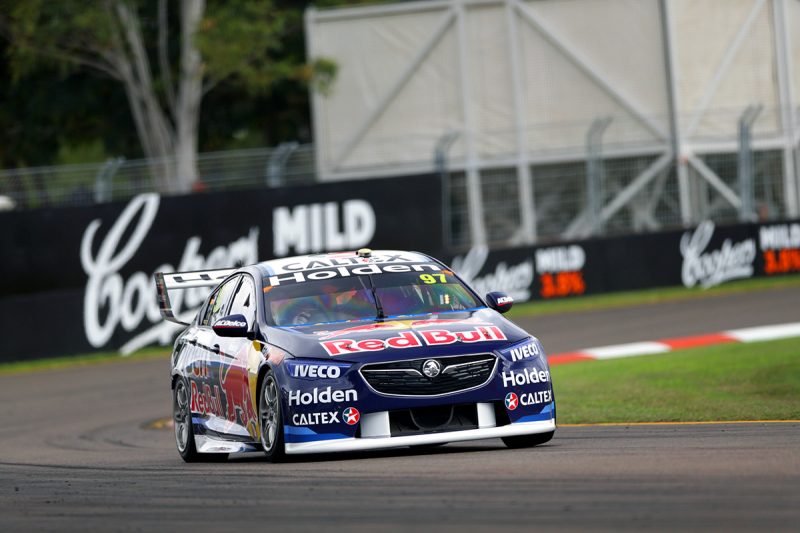 Shane van Gisbergen has gone over two tenths faster than the rest to take the Armor All Pole Position for Race 18 of the season in Townsville.

Both the Red Bull Holden Racing Team entries will start from the front row for the final leg of the Watpac Townsville 400 after Jamie Whincup secured second.

Van Gisbergen had put the #97 ZB Commodore on provisional pole and delivered a high-commitment 1:12.1042s.

The New Zealander, who nearly scraped the wall at Turn 3, went 0.15s faster than his earlier qualifying benchmark as he set the fastest lap of the weekend.

“As I’ve said all weekend, thanks to these guys and girls, we’ve made a huge step forward and it feels really awesome in qualifying trim,” said van Gisbergen.

“All three of us, we’re in the top 10 and (I feel) just privileged to drive these cars.

“The car was amazing that lap, drove it quite smoothly as well, but it was hooked up.

“Hopefully we can make a step forward in the race and challenge for the win.”

Jamie Whincup emulated his team-mate is using almost all the road at Turn 10 on his way to a 1:12.3386s in the #1 Triple Eight ZB Commodore.

“It’s all she’s got; had a bit of a dip there. Hopefully it’s good for the race.”

Scott McLaughlin (#17 Shell V-Power Racing FGX Falcon) followed the defending champion on-track but was the big loser in the session when he could set what was ultimately just the seventh-fastest time.

“Just messy,” was his self-assessment of the lap.

“Quite loose. But all good; probably a bit of myself pushing.

“We’ve gone too far in some ways but we’ve got potential.”

Rick Kelly therefore gained one position in the #15 Castrol Nissan but was still 0.1146s away from the second of the Triple Eight machines.

He will share Row 2 with David Reynolds (#9 Erebus Penrite ZB Commodore), who was only 0.0399s slower again.

Will Davison temporarily went fastest despite a ragged run through Turn 6 in the #230 Milwaukee FGX Falcon.

He will start on Row 3 with Craig Lowndes (#888 Autobarn ZB Commodore), both of whom had found significant time relative to their efforts earlier in the day.

The Mobil 1 Boost Mobile cars rounded out the 10, with James Courtney (#25 ZB Commodore) set to start on the inside of Scott Pye (#2 ZB Commodore) after both also ran on used tyres.