Harris leads all the way in SuperUtes Race 2

Harris leads all the way in SuperUtes Race 2 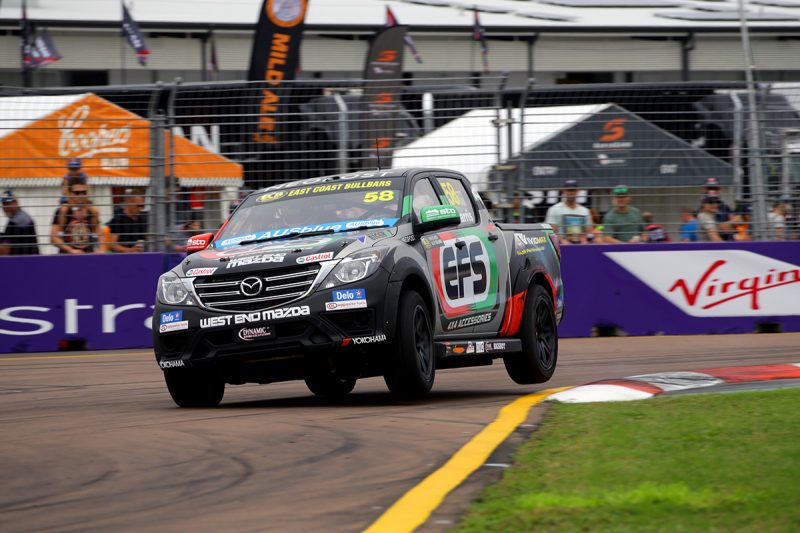 Ryal Harris benefited from a full reverse grid to lead from start to finish in ECB SuperUtes Series Race 2 in Townsville.

A Safety Car period in the latter half of the race brought the #58 Peters Motorsport Mazda BT-50 back to the field but Harris held his nerve for a fourth race win of the season.

The three-time V8 Utes series winner finished the opener last having lost a turbo hose but was handed a reprieve when Race 1 winner Craig Dontas drew number 10 out of the hat.

Harris led into the first corner and at one stage was over four seconds out in front.

Elliot Barbour, who also had a technical drama during Race 1, started third and passed Ben Walsh to move into second on Lap 5.

He had just about halved Harris’ advantage when the race was neutralised on Lap 8 due to Christopher Formosa coming to grief at Turn 6.

While the incident was not captured on television, the evidence suggested that Formosa had lost control of the Ranger Racing Ford Ranger at the challenging sweep and came to rest against the wall.

Barbour attacked Harris into the first corner when the race restarted on Lap 11 but was on the wrong side of the road in the #87 Sieders Racing Team Mitsubishi Triton.

Harris finished 1.70s ahead of Barbour after 13 laps, while Ben Walsh (Western Sydney Motorsport Toyota Hilux) ran near the front throughout on his way to a SuperUtes personal best of third position.

Dontas had driven from the back to fifth by the time the Safety Car appeared but incurred damage to the SRT Triton as the field piled into Turn 2 upon restart and ultimately finished two laps down in seventh.

Matt MacKelden (SRT Hilux) was the last classified finisher as Aaron Cameron slowed late in the piece in the second of the Peters BT-50s.

Round 3 concludes with another race this afternoon at 1320 local time/AEST.