Ryal Harris has come from the third row of the grid to win the final race of Round 3 of the ECB SuperUtes Series in Townsville.

Harris was aggressive after an early Safety Car, when he made four positions in three laps to take over the lead and go on to a fifth race win of the season.

Craig Dontas and Craig Woods started from the front row but there was drama further back when Tom Alexander speared across the track and clouted the wall at the first corner.

The New Zealander had got a run on Ben Walsh but they made side-to-side contact which caused the Ross Stone Racing Holden Colorado to spin. 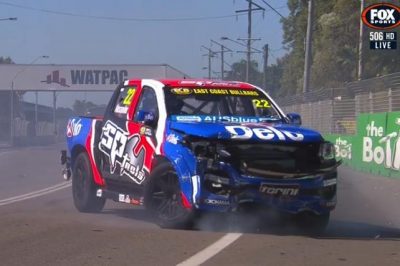 Alexander appeared to not be seriously injured but the Safety Car was called to recover the car and reposition the wall.

Woods had control of the field when the race restarted on Lap 5, having nipped past Dontas out of Turn 2 just before the yellows were called.

Elliot Barbour quickly took second off Dontas in the other Sieders Racing Team Mitsubishi Triton, before Harris forced his way past both Dontas and Aaron Cameron at Turn 3.

Harris then got a run on Barbour off Turn 2 and put his Peters Motorsport Mazda BT-50 down the inside at the other end of Charters Towers Road.

The three-time V8 Utes series winner pulled away in the nearly three laps which remained to win by more than two seconds.

Woods re-passed Barbour late in the piece to pinch the round win and extend his series lead.

Cameron recovered from an off at Turn 6 to finish fourth in the second Peters BT-50, ahead of Walsh (WSM Hilux) and Tomas Gasperak (Team 18 Holden Colorado).

Dontas faded in the latter half of the race on his way to seventh, from Matt MacKelden (SRT Hilux).

Christopher Formosa was a non-starter having bent the diff housing in the Ranger Racing Ford Ranger when he came unstuck at Turn 6 in Race 2.

Round 4 supports the Coates Hire Ipswich SuperSprint at Queensland Raceway on July 20-22.