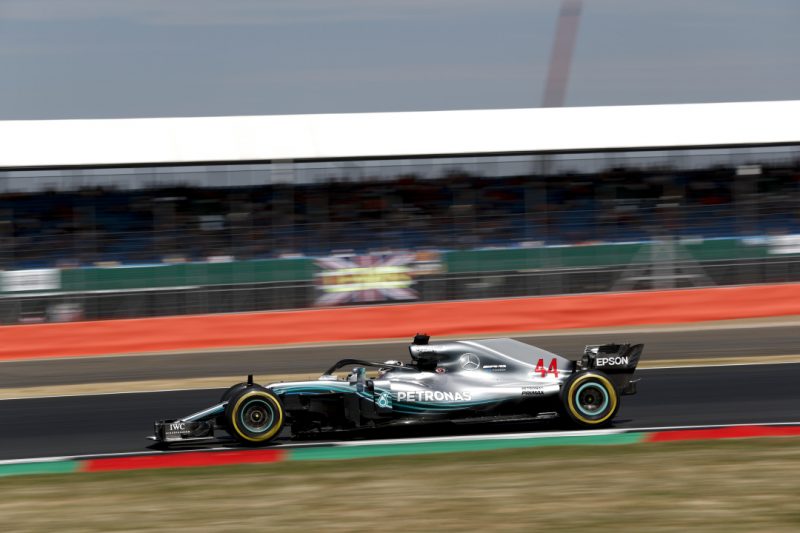 Lewis Hamilton has claimed his sixth pole at the British Formula 1 Grand Prix after a thrilling qualifying battle with Sebastian Vettel.

The Mercedes driver managed a best of 1:25.892s to set a new track record, beating the Ferrari driver by just 0.04s.

Hamilton had claimed provisional pole as the final part of qualifying began, only for Vettel to lap 0.06s faster with a 1:25.936s.

Losing time in the first split on his final run, Vettel was unable to improve as Hamilton dug deep to pull out his pole lap.

Kimi Raikkonen was not far off the back of the leading two in third, setting a time within a tenth of Hamilton’s.

The Finn was left ruing a missed opportunity, locking a wheel on his first flying lap before improving to third on his second attempt.

Both Haas drivers made their way into the final part of qualifying with Kevin Magnussen ahead of Romain Grosjean.

Charles Leclerc again made it through to Qualifying 3 for Sauber and will start ninth, with Esteban Ocon 10th for Force India.

Qualifying 2 began with a flurry of activity as the heavy hitters exchanged ownership of the track record.

A mistake saw Hamilton abandon his opening effort as Bottas set the early pace with a new track record time of 1:26.413s.

Having made a mistake on his first set of tyres which forced him to run an extra lap, Hamilton opted to run again in the final moments.

The Mercedes driver aborted the lap, while Bottas completed a second run without improving on his earlier attempt.

Red Bull elected to sit out the final moments, believing both Ricciardo and Verstappen were safe with their gap back to the bulk of the field.

Eliminated after the second of the three-part qualifying session was Nico Hulkenberg, Sergio Perez, Fernando Alonso, Gasly and Marcus Ericsson.

Lance Stroll found himself beached early on in the first part of qualifying, the Canadian losing the rear as he turned into Brooklands.

The Williams stopped short of the barriers, though it ended his session early.

There were more nervous moments for Williams when Sergey Sirotkin got it wrong at Stowe, finding himself caught in the gravel just shy of the barrier.

Unlike his team-mate, Sirotkin was able to dig himself out and return to the pits and carry on in the session, only to be eliminated at the end of Qualifying 1.

It had been a busy period between sessions for Toro Rosso, which had been forced to replace the suspension on Pierre Gasly’s car on the insistence of the FIA.

Carlos Sainz was the surprise victim at the end of Qualifying 1, the Renault driver eliminated in from the first part of qualifying for the first time in 2018.

McLaren also lost one car, with Stoffel Vandoorne culled as team-mate Fernando Alonso made the cut in 11th place, though Alonso fell to 13th in the final reckoning.

It’s Hamilton’s fourth consecutive pole positing at Silverstone, which will see the British Grand Prix begin on Sunday at 2310 AEST.