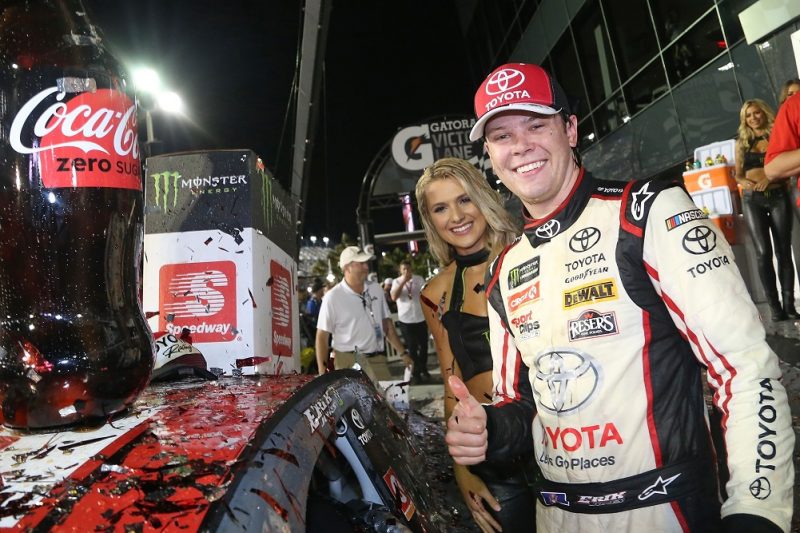 The #20 Joe Gibbs Racing Toyota driver swung by Martin Truex Jnr on the final lap during the second overtime of the race to win in what is his 57th start.

AJ Allmendinger crossed the line a close third ahead of Kasey Kahne and Chris Buescher in fifth.

The race changed complexion on Lap 121 when the front running cars kicked off a cycle of green-flag pit stops for the run to the flag.

Race leader at the time, Jimmie Johnson, stopped outside his pit box and received a one-lap penalty for the matter, while Clint Bowyer also copped a sanction for having a loose wheel on pit road.

With four laps to go, a major crash unfolded at Turn 2, with big hitters Johnson, Joey Gase, Aric Almirola and Michael McDowell all involved, pushing the race into overtime.

Kevin Harvick led the field into overtime, but Truex Jnr took over the top spot as another multi-car wreck occurred before the field could take the white flag.

Darrell Wallace Jnr and Clint Bowyer made contact on the main straight, firing the #14 of Bowyer into the wall and triggering chaos behind.

On the second overtime restart, Truex Jnr once again led the pack to green until Jones powered his way by and into the lead on the last lap to take the victory.

Ricky Stenhouse Jnr swept first two stages of the race but finished a lap down in 17th after taking damage in a later crash.

He also initiated a pair of accidents in the second stage which together accounted for more than half the field, including series leader Kyle Busch.

Busch wasn’t running at the finish but holds onto the points lead having been classified 23rd.

The Monster Energy NASCAR Cup Series heads to Kentucky Speedway next for the Quaker State 400 on July 13-14 (local time).