Michael Caruso and Anton De Pasquale are at odds over a Race 18 clash that the former has labelled ‘probably the biggest hit’ of his career.

The pair were fighting over 19th position before contact ensued on the run towards Turn 11 on lap 61 of 70 at Townsville’s Reid Park circuit.

De Pasquale’s Erebus Motorsport Commodore hit the rear of Caruso’s Nissan Altima near the top of the braking zone after the latter had moved to defend his position.

The hit sent Caruso onto the grass before collided with a tyre barrier position on the inside of the corner, resulting in a sickening impact.

While he emerged from the clash unscathed, Caruso was upset by the manner in which his race ended and surprised the Supercars rookie was not forthcoming with an apology.

The incident is being investigated by stewards.

“Unfortunately someone else’s actions to end our weekend like this is somewhat disappointing,” Caruso told Speedcafe.com.

“It is pretty clear for everybody to see I got hit square in the back. I’m sure the category will investigate and apply action.

“To be honest I am surprised he hasn’t come down already but each to their own. 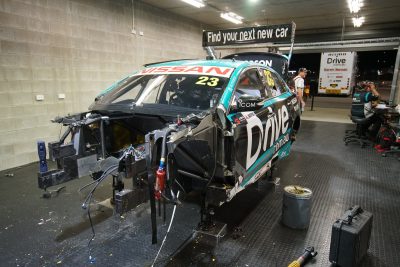 “It was a pretty big hit and probably the biggest I’ve ever had to be honest.

“It’s fortunate the cars are built the way they are these days that looks after us a lot better. It is a very big positive for the category.

“I was coming out of Turn 10 and I went over to cover and copped a really big hit and that sent the car onto the grass and into the tyre barrier.

“I’m disappointed because it is someone else’s actions so close to the end of the race (that) has resulted in our team spending a lot of time and money to turn it around for Ipswich.”

De Pasquale’s version of the incident differs to that of Caruso.

The 22-year-old said he didn’t plan on seeking out the driver when quizzed after the race.

“I don’t know. If I run into him, maybe. There’s not much to talk about. It looks worse than it was. He was defending and I didn’t expect it,” said De Pasquale.

“He had a bit of slide, I went to go to the inside to make a pretty easy pass.

“He sort of turned down to block, and at the same he did that I went and then he braked.

“I was pretty close to him, so there was no time to avoid him and unfortunately there’s two damaged cars.

“I haven’t really watched it in that much detail, but I feel like I didn’t have anywhere to go. And there wasn’t much to fight for at that point in the race.

“I didn’t expect such a big defensive move, and at the same time I didn’t brake any deeper. I braked where I did the previous lap when I was catching him.

“He was just there when I went to do it. We were racing for 19th at that point, so you don’t want to damage your car racing down there.

“The pace I had, I was going to get him anyway. I thought that was the right time.”

The shunt had the potential to affect Nissan Motorsport’s plans of staying in Queensland over the next two days to prepare the cars, before sending them south for the next round at Ipswich (July 20-22).

After reviewing the damage post-race, the squad believe the car can be repaired with the components at its disposal in Townsville to contest the Coates Hire Ipswich SuperSprint.

“There are a few little tweaks on the front right which we will pull out tonight,” said team manager Scott Sinclair.

“The rails are essentially straight so that is a good thing.

“We will fix it when we get home (Braeside) but we have decided now to stay as planned here and we will be able to fix it to be perfectly raceable and safe.

“(But) Just for our own peace of mind when we get home we will probably pull it apart and fix it.”