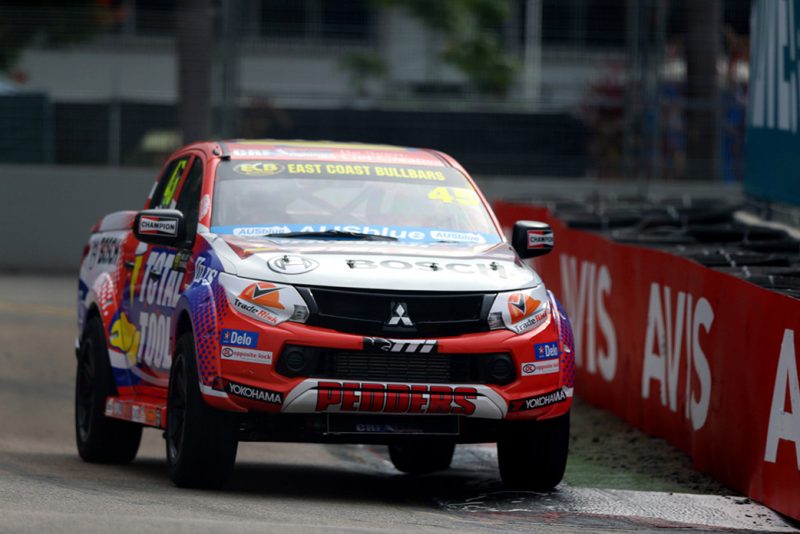 Craig Dontas and Elliot Barbour will make for an all-Mitsubishi Triton front row in the opening race of SuperUtes Round 3 in in Townsville.

Dontas clocked a 1:35.6700s during his fourth lap of Armor All Qualifying, putting the long-time V8 Utes driver top of the order for a second time in a 20-minute session run under grey skies.

His Sieders Racing Team team-mate Barbour was one of a number of drivers who threatened to unseat Dontas.

The SuperUtes debutant and practice fast man clocked the fastest first sector on his final attempt but broke into a slide through Turn 6 and gave up the lap.

That development left Dontas a healthy 0.2857s clear of the field, and the third different pole-sitter in as many ECB SuperUtes Series rounds.

The lockout is the first in SuperUtes’ short history.

Ryal Harris was only 0.0121s further from the pace in the first of the Peters Motorsport Mazda BT-50s.

The Round 1 pole-sitter will share Row 2 with the Round 2 pole-sitter, Tom Alexander (Ross Stone Racing Holden Colorado).

Aaron Cameron sat out the start of the session as his Peters BT-50 remained in pit lane with bonnet up.

When he did enter the race track, he eventually ran as high as fourth before settling in fifth.

Christopher Formosa and the Ranger Racing Ford Ranger ended up as high as they have been in a qualifying session to date in sixth.

In a similar outcome to Friday practice, the three Toyota Hiluxes were seventh, eighth, and ninth, but this time the order was Ben Walsh (Western Sydney Motorsport), Matthew MacKelden (SRT), and Craig Woods (WSM).

Youngster Tomas Gasperak rounded out the field in the Team 18 Colorado.