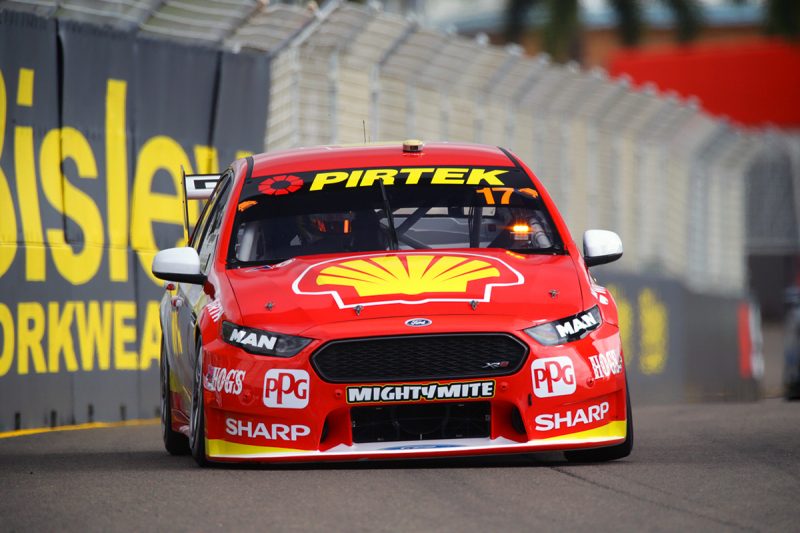 Scott McLaughlin has taken an eighth Armor All Pole Position for the season in a qualifying session largely decided during a first run conducted in overcast conditions.

The New Zealander and Jamie Whincup were split by only 0.0553s at the head of the field, while the latter’s Triple Eight Racing Engineering team-mates Shane van Gisbergen and Craig Lowndes ended up third and fifth respectively.

McLaughlin was one of a number of drivers to start the session with an out-and-in lap, but when he did attempt a flyer he laid down a 1:12.1239s in the #17 Shell V-Power FGX Falcon.

Van Gisbergen similarly slotted into third in the #97 ZB Commodore, making for a Triple Eight two-three-four at the time.

Lowndes was impressive out of the box with a 1:12.3892s in the #888 Autobarn ZB Commodore which briefly had him more than three tenths clear of the field.

David Reynolds, however, was one of the few who improved during subsequent runs and he broke up the Banyo contingent with a lap which put the #9 Erebus Penrite ZB Commodore fourth-fastest.

Reynolds in fact improved in the final run, but not enough to advance any further.

Whincup went personal best to the first sector late in the 20-minute session but that lap was ultimately no quicker.

There were, in fact, no net positional changes up and down the field in the final run as the sun came out, meaning that McLaughlin picked up an eighth pole of the year ahead of Race 17.

“Fantastic car (but) I made a massive blue in that last run there so luckily no one went faster,” said the championship leader.

“I was a bit worried about rain around here, I reckon it’d be pretty sketchy,” he added regarding forecasts for this afternoon.

“I think everyone at Shell V-Power Racing had their heads down yesterday; we weren’t the quickest car but we knew we could be and we’ve certainly worked on it.

“Thankfully we’ve got the goods.”

Whincup was buoyed by improved one-lap pace for Triple Eight.

“That’s as close as we’ve been in qualifying spec for a long time; we’re all pretty encouraged by that,” said the defending champion.

“Obviously we’d love to be on pole but (we) made some big gains, which is the most important thing.”

Mark Winterbottom achieved a best starting berth in six races by putting the #5 The Bottle-O FGX Falcon sixth on the grid.

Fabian Coulthard was ninth-fastest in the #12 DJR Team Penske FGX Falcon) and Rick Kelly (#15 Castrol Altima) the first of the Nissans in 10th.