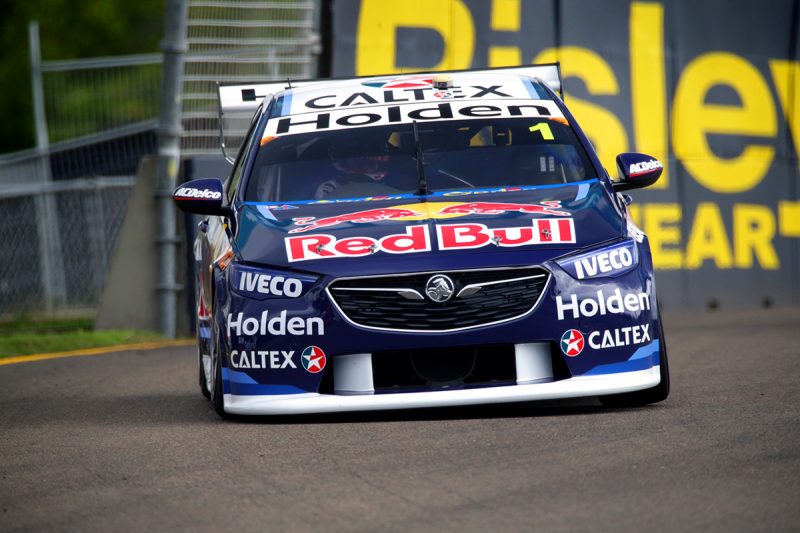 Jamie Whincup dominated the opening stint before holding on after a late Safety Car to lead Shane van Gisbergen to a Red Bull HRT one-two in Race 17 in Townsville.

The defending Virgin Australia Supercars champion passed pole-sitter Scott McLaughlin on Lap 2 and disappeared up the road through the first 20 laps.

A Safety Car 15 laps from home compressed the field and gave van Gisbergen a chance to win but he ultimately settled for second and McLaughlin rounded out the podium.

McLaughlin got the jump from pole position and led the field through the opening corners as the three Triple Eight cars and David Reynolds fought over second position.

Whincup managed to slot in ahead of Reynolds halfway around the circuit, van Gisbergen held fourth, and Mark Winterbottom moved by Craig Lowndes to take up fifth.

Whincup executed a textbook move past McLaughlin at Turn 2 on Lap 2, and the defending champion used the track position to his advantage.

He regularly put multiple tenths per lap on the field and was around 10 seconds up the road from McLaughlin when the #17 Shell V-Power FGX Falcon entered pit lane after Lap 21.

The Banyo cars displayed good pace early on as van Gisbergen passed Reynolds on Lap 10 and the last-start winner stepped aside to let Lowndes also go through a lap later.

He did, however, jump McLaughlin when they pitted together due to a delay removing the air spike from the #17 Ford.

Whincup and Lowndes, the latter of whom had also made an easy move ahead of Reynolds on the race track, took service for the first time after Lap 22.

The #1 ZB Commodore emerged with a lead of around 12 seconds after the stop, with van Gisbergen second, McLaughlin third, Lowndes fourth, and Reynolds fifth once the cycle played out.

Van Gisbergen held up McLaughlin early in the middle stint of the race while Whincup put a little more margin on his team-mate.

McLaughlin, however, lost the tail of the #97 ZB Commodore around half-distance and instead had to look back to the threat of the third Triple Eight car of Lowndes.

The retiring veteran had a big look at Turn 2 on Lap 38 but was still behind McLaughlin when they and Reynolds pitted a second time five laps later.

Van Gisbergen was into the lane again a lap later, and Whincup another three after.

The long-time leader emerged with a gap of around 15 seconds to van Gisbergen, McLaughlin and Lowndes held third and fourth, but Winterbottom moved ahead of Reynolds during the pit stops.

Whincup’s lead diminished over the next few laps but was still over 10 seconds when a Safety Car was called for debris on Lap 55.

He threw down the challenge to Whincup and got to around half a second behind but gave up the fight in the final few laps and cruised home.

Whincup therefore took a first win since Race 5 at Symmons Plains and his 10th in Townsville, 2.19s clear of van Gisbergen after 70 laps.

“I just had to remind myself I could still drive, but (engineer) David Cauchi gave me an absolute rocket today.

“(I) had a lot of fun, we were able to lead from the start, one-two for the team; couldn’t be happier.”

McLaughlin collected a handy points haul as the final podium finisher and still sits 152 points clear of van Gisbergen in the title race.

Fabian Coulthard (#12 DJR Team Penske FGX Falcon) was eighth under Safety Car but had fresher tyres than all around him having been last to make his second pit stop, at the end of Lap 50.

He picked off a couple when the race restarted on Lap 58 and Winterbottom at the end of the main straight on Lap 59.

Lowndes, however, denied Coulthard another move and they finished fourth and fifth respectively.

Winterbottom took sixth in the #5 The Bottle-O FGX Falcon, his best result in six races.

Reynolds lost ground after the restart but forced his way past Cameron Waters to run seventh at the chequered flag.

Garth Tander finished 16th but faces a post-race investigation for a Lap 2 incident with James Courtney.

The #25 Mobil 1 Boost Mobile ZB Commodore spun after a touch from Tander (#33 Wilson Security ZB Commodore) at Turn 2, but the latter couldn’t move right due to Anton De Pasquale’s (#99 Erebus ZB Commodore) presence on his inside.

Courtney went on to finish 18th.

Jack Le Brocq (#19 Tekno Autosports ZB Commodore) was also a finisher in 22nd despite a significant hit with the wall between Turns 2 and 3 when he tangled with Courtney and James Golding (#34 Garry Rogers ZB Commodore) on the final lap.

The Sunday program for Supercars begins with Armor All Qualifying for Race 18 at 1130 local time/AEST.