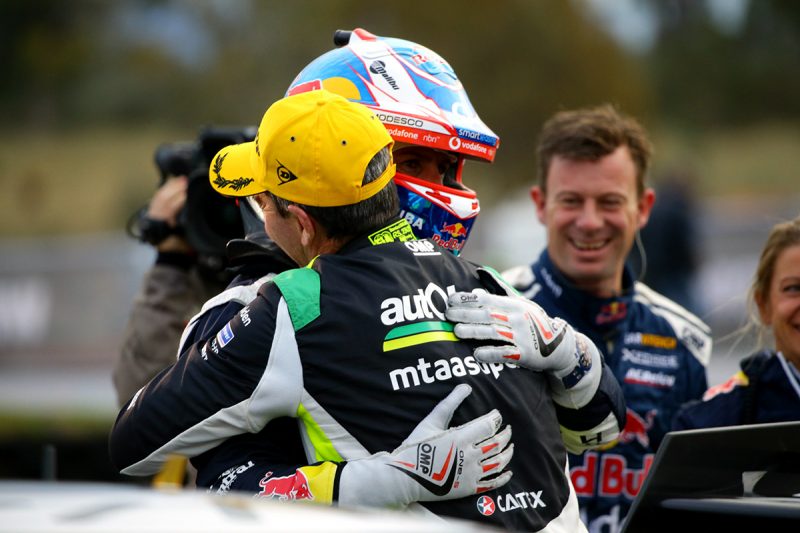 Jamie Whincup has paid tribute to the impact which Craig Lowndes has had on his career after news that the veteran will retire from full-time driving at season’s end.

The pair have been team-mates at Triple Eight Racing Engineering since Whincup arrived at Banyo in 2006 as a 22-year-old.

That season was Whincup’s third as a full-timer in the Virgin Australia Supercars Championship after he was let go by Garry Rogers Motorsport following an uninspiring rookie season in 2003.

He drove the 2004 enduros for Team Perkins Racing before spending 2005 at an expanded Tasman Motorsport.

It was there that Whincup’s performance at Bathurst in particular, when he and the late Jason Richards finished runner-up to Mark Skaife and Todd Kelly, caught the eye of Triple Eight chief Roland Dane.

He won on his first weekend with Triple Eight in Adelaide and finished the 2006 season 10th in the standings.

The Melbourne-born driver fell just short of the title the next year before an astonishing run of seven championships in a decade.

During that period, Whincup and Lowndes became the first drivers in 24 years to pull off a Bathurst 1000 ‘three-peat’ (from 2006 to 2008), before he bagged a fourth with long-time friend Paul Dumbrell in 2012.

Whincup and Lowndes represent the bulk of Triple Eight’s history in Supercars, which began with the buy-out of Briggs Motorsport in the latter half of 2003.

They are also the only two drivers in Australian Touring Car/Supercars history to have notched up a century of championship race wins, the former surpassing the latter’s record last year.

Now 35 years of age and one of the greats in his own right, Whincup says that Lowndes played a crucial role in his career.

“I rolled in, young punk, thought I knew everything but knew nothing and Lowndesy just welcomed me with open arms and certainly helped me out,” recalled Whincup.

“I’d love the opportunity to repay another young kid.

“(I) Didn’t get that opportunity with Shane (van Gisbergen) because he was already established when he came, but hopefully one day there’s a young kid who’ll come into our team and I’ll have the opportunity to do the same thing.”

Whincup was a notable attendee during this morning’s press conference when Lowndes revealed his future.

He said that Triple Eight would be ready to support its long-time employee when Lowndes arrives in Newcastle for his final races as a full-time driver in November.

“It’s difficult to talk about because this is not just something we do on the weekend, this controls your life; it’s a life sentence,” Whincup responded when asked how the team environment would change.

“For Lowndesy to have done something for 20-plus years, it’s clearly emotional for him at the moment.

“I think that’ll sort of relax a little bit, but then of course it’ll all come back hard and strong come Newcastle.

“We’re just there for it, we’re very thankful for the time and everything he’s done for the team.

“He’s the icon of the sport, took over from where Brocky left off and is going to be missed by the whole fraternity.”