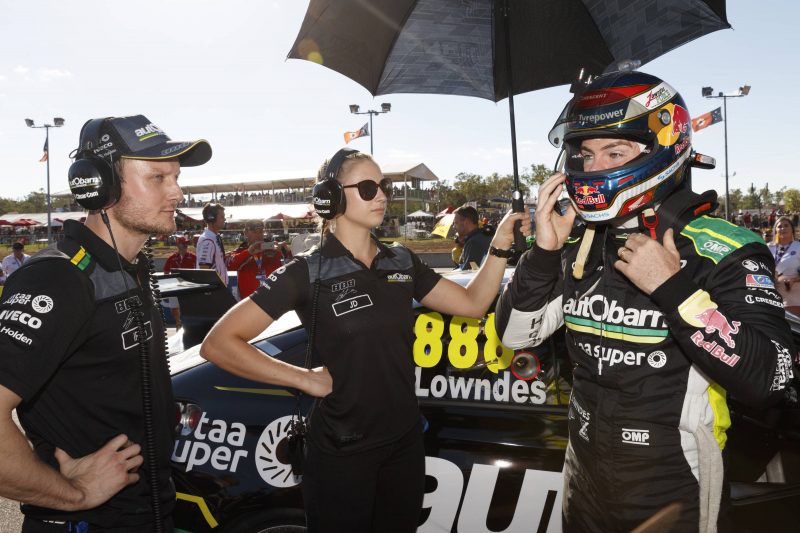 The Supercars paddock has paid tribute to Craig Lowndes following the touring car legend’s decision to call time on his full-time Supercars career.

The Triple Eight driver confirmed that this season will be his last as a full-time competitor in the category before going on to take up a co-driver role at the squad he joined in 2005.

It was a decision that the 44-year-0ld labelled as the hardest of his career to make.

Five-time Supercars champion Mark Skaife admitted it was a sad moment for the sport given Lowndes’ status as a driver and firm favourite among fans.

However, Skaife feels that Lowndes being the face of the sport for so long coupled with the demands outside of his on-track commitments over the last 21 years has played a part in today’s announcement.

“I think, behind all of us, there’s always a feel of ‘Why do you actually really do it (racing)?’ and the first (reason) is always driving the cars and enjoying driving,” said Skaife, who partnered Lowndes to win the 2010 Bathurst 1000 and was a team-mate at the Holden Racing Team.

“The second one is the level of competition and enjoying competing.

“There’s so many demands, and I felt that for Craig, he’s been the face of the sport for so long, the demand, day in, day out, is massive, and I can’t help thinking that.

“So it makes me sad that these things happen, he’s an incredible contributor and an amazing spokesman for the game, (an) absolute (Peter) Brock protégé, we’ve been team-mates and fierce rivals…

“I can’t help being really sad about the way that happens.

“It’s great that he’ll stay involved in the game and all the things that he’s spoke of, he and Roland have got a great relationship, but for a bloke that’s been around for almost 25 years and has been so good, it’s a sad day when he won’t be on the grid.”

The Shell V-Power Racing driver admitted that it had been a privilege to race against the Supercars veteran who he looked up to as a child.

“For me guys like Lowndes and Murph were the backbone of our sport and have been so good for people coming up through the sport like myself,” said McLaughlin.

“Absolutely, (it is a shock). I was surprised.

“I knew he had a contract for a little bit longer but it is his decision and I’m sure everyone will stand by him.

“It is good that he is still going to be around, he is fantastic for the sport and he is a champion. I’m just privileged to be able to race door-to-door with him.”

Nissan Motorsport’s Rick Kelly was also blindsided by the announcement, admitting he felt Lowndes still had plenty left to offer as a full-time driver.

“I’m taken by surprise of it and quite saddened by it,” said Kelly, who narrowly denied Lowndes the championship in 2006.

“We have had some great battles over time and some clashes as well, but I thought he had a little bit left in the tank that is for sure. It doesn’t feel quite right to me.

“It is sad he is such a massive part of the sport and he has done so much for it. He created a household name for himself and dragged the sport along with him. I’d like to see him stay a little longer than what we have heard today.”

Erebus Motorsport driver David Reynolds likened the announcement to ‘Jesus dying’ before going on to pay tribute to his rival.

While Lowndes told the media that the decision retire was mutual between he and the Triple Eight, Reynolds does not share that view.

“It is like announcing Jesus has died. It is huge,” said Reynolds.

“I’m a little bit disappointed because I thought Lowndesy would be there forever and he is such a big personalty for the sport.

“When you watch the press conference I didn’t feel like it was his own decision.

“That is just how I feel but I haven’t spoken to him yet but I will find out what he has got to say.

“It will impact the sport and it is going to be interesting to see how it all unfolds.

“He is going to be missed, he has had an unbelievable career and he is a great competitor.”

Tributes have continued to flow on social media with a selection highlighted below.

Sad to see @craiglowndes888 step down, an incredible career, the end of a pretty special era in Australian Motorsport. had some great battles and some clashes but I feel lucky to have raced with you! I started in Motorsport selling Craig Lowndes hats at HRT when I was 14…

Sad to hear @craiglowndes888 is retiring from Full-Time Supercars racing. Feel very grateful to have raced hard against a modern day legend. All the best on your new chapter mate! One of my favourite photos from my time as a supercars driver! #VASC pic.twitter.com/oCmqwCwVin

So many great moments with this legend of the sport @craiglowndes888 We both entered this sport in 1996 and been an absolute pleasure competing and watching you over the years.… https://t.co/DBfPlz3I63

@craiglowndes888 has just announced his retirement from full time #VASC racing at the end of 2018! A man I have idolised since I was a kid and still do today. It has been such a privilege to race him. All the very best for the future mate. #cheersCL #VASC pic.twitter.com/lx5ZF4UHPW

Cheers to an incredible driver & legend of our sport. I’ll miss the battles, it’s been a honor to of been able to share the track with you for so many years.
Hard & fair racer, great bloke & supporter of young drivers. Thanks CL 👍🏻#vasc @craiglowndes888 pic.twitter.com/6jBgFYv4ox

👏 What an amazing career you have had @craiglowndes888.

Thank you for your contribution to Australian motor sport.

One of the all-time greats! #AusGP ambassador @craiglowndes888 will retire from full-time @supercars competition at the end of the 2018 season. All the best, Craig #ThanksCL pic.twitter.com/m7K8xNdIuU

“Ultimately, the fans are the backbone of our great sport and the reason I’ve pulled my helmet on every race weekend, so to them, thank you.”

What a career @craiglowndes888, it’s been great to race with you and you’ve been a gentleman to race against. A true legend of the @Supercars #ThanksCL #VASC pic.twitter.com/MD3i6cXZfH