Porsche’s record shattering lap around the Nordschleife is a feat never before achieved in human history.

Timo Bernhard rocketed around the famed German circuit at the controls of the Porsche 919 Hybrid Evo to become the first man to complete a lap in under six minutes.

Some say Bellof’s time is one of the greatest driving performances – on the verge of utter brilliance while on a knife-edge.

But is Porsche’s new record with the 919 Evo more significant?

It has to be said, the lap time set in the 919 Evo just last week is an unofficial record, because of the fact it was not achieved during an official session. 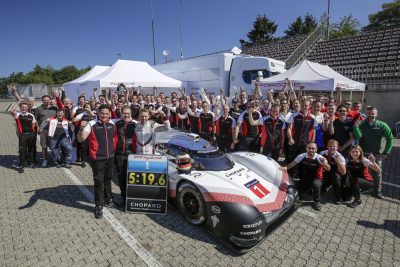 Ultimately, Bellof’s 6:11s took the German driver, who tragically lost his life in an accident at Spa-Francorchamps in 1985, to pole position for the 1983 Nürburgring 1000km race.

Bellof’s lap came at a time before the Nordschleife had been sanitised, when cars were made of honeycomb aluminium, without power steering and capable of nearly 400km/h at Le Mans, in an era when drivers were still regularly losing their lives.

In 1981, the Nürburgring began construction of the Grand Prix circuit, therefore, resulting in a bypass that was added to the Nordschleife ahead of the 1983 1000km race.

This shortened the track from 23km to what we know now as the Nordschleife in its 20.8km configuration, and would mark the only time top-level sports cars raced on the layout before the Grand Prix circuit was used from 1984.

One of the greatest racing talents of his time, Bellof, hustled the turbocharged flat-six, 620 horsepower ground effect Porsche which produced astronomical amounts of downforce to a time which stood for 35 years.

Now, that record belongs to the Porsche 919 Hybrid Evo and factory driver Bernhard.

Having already completed a lap around Spa-Francorchamps quicker than Lewis Hamilton’s pole time from the 2017 Formula 1 Belgian Grand Prix, it was clear when images started surfacing of the 919 Evo at the Nürburgring we were going to be in for something epic.

Freed over the European winter from the restrictions put in place by the FIA World Endurance Championship, Porsche unlocked the beast within the 919 Evo.

The car’s unrestricted hybrid system, plus up-scaled version of the four-cylinder petrol engine (that accounts for 720 horsepower on its own), develops an output of 1160 horsepower.

Weighing in at only 849 kg, the Evo generates over 50 percent more downforce than its WEC version. 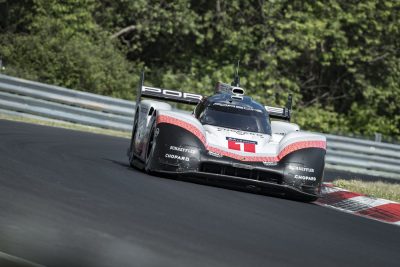 Putting the car to work, Bernhard’s lap was set at an incredible average speed of 233.8 km/h, the car reaching an almost incomprehensible 369.4 km/h down the 2.1km Döttinger Höhe Straight.

“This is a great moment for me and for the entire team – the 919 program’s icing on the cake,” Bernhard beamed.

“The Evo was perfectly prepared and I have done my best on this lap.

“Thanks to the aerodynamic downforce, at sections I never imagined you can stay on full throttle. I’m pretty familiar with the Nordschleife, but today I got to learn it in a new way.”

“For me, Stefan Bellof is and remains a giant,” Bernhard added.

“Today my respect for his achievement with the technology available back then increased even more.”

But how do we compare the two laps; what makes the 919 Evo’s lap through ‘Green Hell’ significant against Bellof’s set almost a lifetime ago?

Bernhard’s 5:19s tour was just under a minute – 51.58 seconds to be precise – faster than Bellof’s historic time.

To put it in perspective, Bellof could have started his lap at Schwedenkreuz, 5km into the lap, and the 919 Evo would still catch and pass the 956 before the end of the lap.

It highlights the extraordinary advancement in technology that Porsche has achieved with the 919 Evo; a prototype race car capable of completing the most challenging 20km of racing tarmac in the world almost a minute faster than anything that has ever existed.

Bellof’s lap was pure, raw, emotive, driven by adrenalin and the sublime ability of a driver at his peak wrestling one of the world’s most iconic racing cars around the most iconic ribbon of race track. Bernhard’s was measured, considered, perhaps without the over-arching sense of danger but no less enthralling, exhilarating and explosive.

Both had just one aim; Bellof to set pole position, and Bernhard to beat Bellof.

And so, 35 years and 31 days later, Bellof might have lost his mantle of the fastest man around the Nordschleife, but his lap will never be bettered.

Still, we can but marvel at Bernhard, and at Porsche, which can justifiably say they are the fastest to ever lap the Nürburgring-Nordschleife and without a doubt, have the most remarkable onboard footage to prove it.