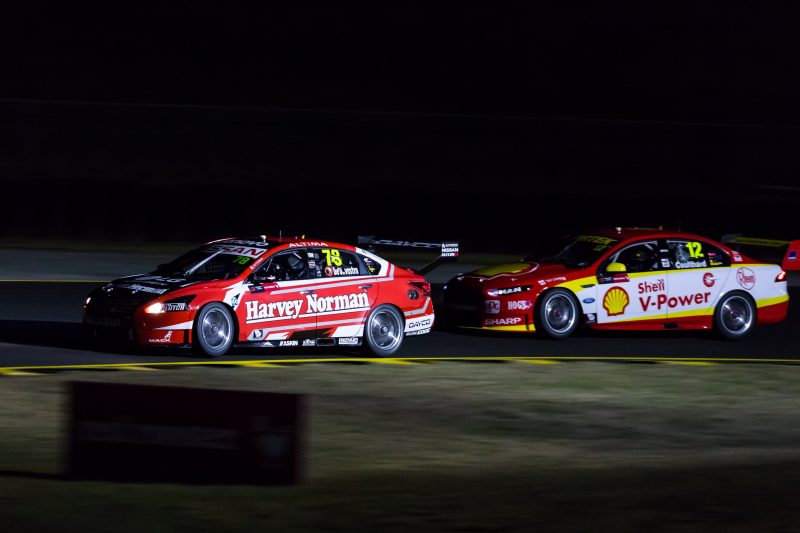 Supercars teams will be allowed to run reflective paint/liveries at the SuperNight 300 pic: AJP Photography

Supercars has clarified to teams rules regarding headlights and changes to race cars including the use of reflective liveries/paint for the upcoming Red Rooster Sydney SuperNight 300.

The championship will race under lights in Australia next month for the first time since 1997 when the series heads to Sydney Motorsport Park for a new recently expanded format held on August 3-4.

Organisers have confirmed 60 lighting towers will be installed to light up the 3.91km circuit which will now be used for the race instead of the 2.8km Druitt layout originally tabled.

The topic of car changes for the event has been discussed among teams which has prompted a note being sent around the paddock clarifying rules and procedures ahead of the 300km night race.

According to Supercars the lighting will be more than sufficient for drivers to race without the use of headlights or any extra lighting devices to enhance visibility.

As a result, teams have been told not to alter the candela (brightness) of headlights.

It is understood a further caveat for this is the fact brighter lights will distort the quality of the television broadcast.

However, headlights will be checked by championship staff and must operate as usual.

While changes to headlights are not permitted, all cars will be fitted with small glow strips in the cabin, installed by Supercars Media, purely to illuminate the cockpit enough for television cameras.

Teams are also permitted to run reflective paint or stickers on their cars but will have to notify Supercars beforehand to seek permission.

The championship is encouraging the use of such items to enable cars to be more visible under lights for TV cameras.

Speedcafe.com understands that teams and sponsors have investigated the advantages of reflective materials.

Nissan Motorsport co-owner Todd Kelly says Supercars has been proactive in regards to rules regarding headlights and is confident lighting will not be an issue.

“There is a lot of discussion about that because if everyone goes and amps up their headlights it becomes an issue for drivers being able to see where they are going with mirrors full of headlights and the tv side of it,” Kelly told Speedcafe.com.

“Supercars has been pretty proactive about that so there will be no fancy spotlights hanging off the cars.

“They are doing a good job to light up track so it won’t be a necessity.”

The championship will complete a Queensland leg of the series with events in Townsville this weekend followed by Queensland Raceway (July 20-22) before heading to Sydney.