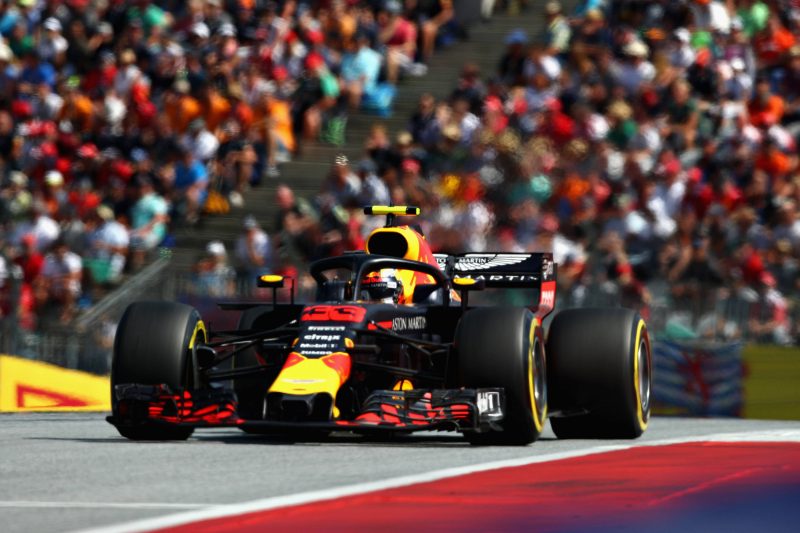 Max Verstappen produced a fine drive to hold off Kimi Raikkonen for victory in an attritional Austrian Grand Prix that saw Mercedes suffer a double retirement.

The Red Bull driver emerged in the lead after taking advantage of a strategy error from Mercedes, who elected against pitting race leader Lewis Hamilton under an early Virtual Safety Car period.

Hamilton appeared in control of the race until then with his engineer admitting over team radio that he had lost the reigning world champion the win.

However, the poor strategy call ultimately didn’t matter as Hamilton suffered a mechanical retirement in the closing stages, which followed after polesitter and team-mate Valtteri Bottas retired from second with a gearbox issue on lap 14.

Vettel’s third place finish allowed the German to regain the championship lead over Hamilton by a point.

The race of attrition also claimed Daniel Ricciardo, who had run as high as second from seventh on the grid, before he exited the encounter on lap 54 with a mechanical issue.

The Australian was fifth when he pulled off the circuit at Turn 1 after being forced to make two pit stops due to excessive tyre wear.

The race began with a frantic opening lap as a fast starting Raikkonen managed to split the two Mercedes cars on the run to the first corner.

Hamilton fought back to take the lead on the inside at Turn 1 while Raikkonen slotted into second as Bottas dropped behind Verstappen in fourth spot.

Raikkonen briefly challenged Hamilton for the lead at Turn 3 but locked up and ran wide at the right hander which allowed Verstappen to attack for second spot.

While the pair squabbled for position Bottas steamed down the outside to take second spot with a well judged move at Turn 4.

Action continued behind as Verstappen took third from Raikkonen after a brief touch in the Turn 7 chicane as Ricciardo watched on in fifth.

The race soon settled down with Hamilton stretching his legs out in front from Bottas as Ricciardo began to close in on Raikkonen in the battle for fourth.

Drama soon struck the battle for the lead when Bottas suffered a loss of power from his Mercedes that resulted in the Finn pulling off the circuit and into retirement.

Although, it was another power unit failure that changed the complexion of the race.

Red Bull and Ferrari elected to pit, double stacking their drivers, while Mercedes opted not to bring Hamilton in.

It ultimately proved to be the wrong decision as Hamilton was unable to open up a big enough gap to pit and rejoin in the lead.

He eventually pitted on lap 25 that saw him rejoin in fourth behind race leader Verstappen, Ricciardo and Raikkonen, with Vettel close behind in fifth.

Tyre durability emerged as a key variable for the whole field due to unusually high track temperatures.

Ricciardo was the first to suffer blistering on his tyres that saw him duck into the pits and surrender second spot to Raikkonen.

Hamilton had been closing in on Ricciardo and Raikkonen before he then suffered tyre dramas and subsequently dropped behind Vettel, before he pitted again prior to retiring from the race.

In the end, Verstappen took the win after seeing off Raikkonen and Vettel.

Haas F1 enjoyed their best race of the season as Romain Grosjean took fourth ahead of team-mate Kevin Magnussen.

The top 10 was rounded out by Fernando Alonso (McLaren), who started from pitlane, Charles Leclerc (Sauber), who ran off the road earlier in the race and team-mate Marcus Ericsson.

Toro Rosso’s Brendon Hartley completed the list of retirements after he suffered a gearbox problem in the closing stages.

The championship heads to Silverstone for the British Grand Prix next weekend.