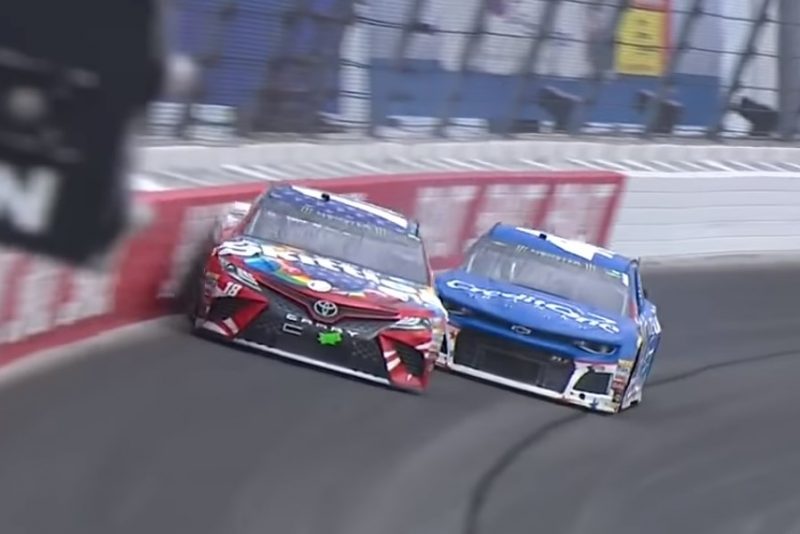 The first touch between the top two on the final lap pic: NASCAR broadcast

Kyle Busch has prevailed in a stunning conclusion to the NASCAR Cup Series race at Chicagoland having lost the lead on the final lap and been pushed into the wall.

He and Kyle Larson twice made contact on the 267th lap of the Overton’s 400 after the latter had closed the gap.

Larson tried to get underneath Busch at Turn 1/Turn 2 but tagged the #18 Joe Gibbs Racing Toyota on exit, which saw it slap the wall.

It allowed Larson to get a run down the back straight, only for Busch to give the #42 Chip Ganassi Racing Chevrolet a tap through Turn 3/Turn 4.

The contact sent Busch into the wall a second time but Larson half spun down onto the apron and grass infield.

The series leader won the race in the wounded Camry while Larson gathered up his slide to take second, 0.444s ahead of Kevin Harvick (#4 Stewart-Haas Racing Ford).

Harvick won Stage 2 with a move past team-mate Kurt Busch (#41 Ford) on the last lap before the green/white chequered flag.

He led at the start of the final stage and twice again before the end, but Busch grabbed top spot in pit lane when Corey LaJoie (#72 TriStar Motorsports Chevrolet) hit the wall and drew what would be the final Caution with just under 50 laps remaining.

Officially, Busch would lead the rest of the way even though Larson nosed in front during that dramatic final lap.

Martin Truex Jnr finished fourth despite being one of four drivers sent to the back of the grid after the #78 Furniture Row Racing Toyota fell afoul of post-qualifying inspection.

Aric Almirola was a stage winner for the first time in Stage 1 but finished all the way back in 25th after subsequently having to twice pit for a loose wheel on the #10 Stewart-Haas Racing Ford.

Round 18 is the Coze Zero Sugar 400 at Daytona International Speedway on July 5-7 (local time).