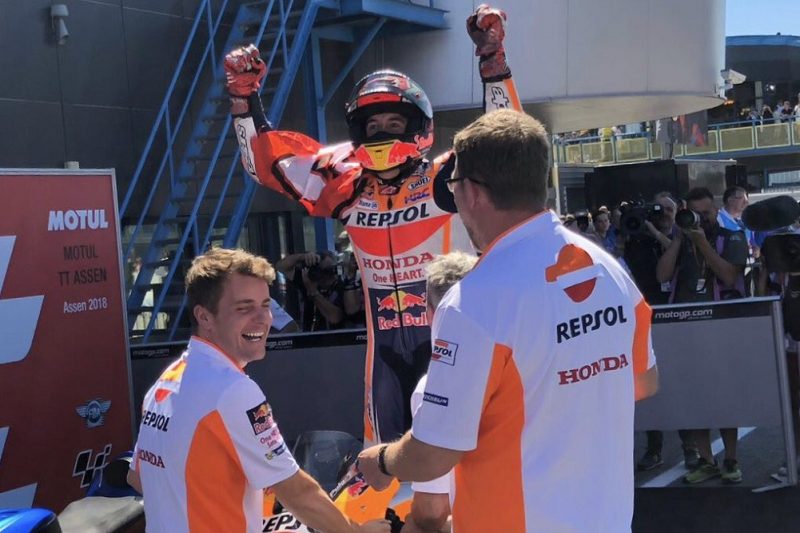 Marc Marquez has come out on top in one of the all-time great MotoGP races at the TT Circuit Assen.

The defending world champion was one of five different leaders in a race which chopped and changed almost every lap.

Marquez streaked away in the last three laps to leave Alex Rins 2.27s adrift in a career-best second position, the Suzuki Ecstar rider having passed Maverick Viñales late on the final lap.

Jorge Lorenzo set the tone for an extraordinary 26-lap encounter when he launched from 10th on the grid to run in second position through the first corner, then lead midway through the opening lap.

Lorenzo continued to hound his future team-mate and reclaimed the lead at De Bult on Lap 4, and Rossi squeezed past the #93 Repsol Honda to take up second position a few corners later.

The top two somehow survived a bizarre collision on Lap 5 when Lorenzo had a moment on the run towards the Ramshoek and was shunted by Rossi as he attempted to gather up his factory Ducati.

How on earth did this not end in disaster for @ValeYellow46 and @lorenzo99 😳😮🙈#MotoGP pic.twitter.com/sbLUV6hIyL

By this time, Marquez and Dovizioso were dicing over the final podium position before they both passed Rossi in quick succession on Lap 7.

Dovizioso then used his Ducati power to blast past Marquez and put the Bologna factory squad one-two.

Marquez soon got back ahead of #04 but it was Rins who was the coming man when he passed Rossi at the Strubben on Lap 8, then Dovizioso exactly a lap later.

Dovizioso outbraked Rins into Turn 1 on Lap 10, while Zarco relieved Crutchlow of seventh position at the Strubben.

Incredibly, Crutchlow was still less than a second behind leader Lorenzo at the end of that lap, at which time second through sixth was Marquez, Dovizioso, Rins, Rossi, and Viñales.

Rins and Rossi both got by Dovizioso next time around, ‘The Doctor’ pulling off his customary move into the Timmer Chicane.

A critical moment came at Strubben on Lap 12 when Rins jammed his Suzuki down the inside of Marquez, who very nearly went down on exit.

Race Control investigated the incident but would decide that no action was to be taken, Rins having neither made contact with Marquez nor run his fellow Catalan out of road.

Dovizioso, a beneficiary of the Rins move, passed #42 at the start of Lap 14 before Marquez returned the favour to Rins four corners later.

At the very front, Lorenzo still had not broken clear and Dovizioso took the lead for the first time on Lap 15.

Marquez also demoted Lorenzo at the end of the lap, but #99 re-passed within two more laps.

It set up a huge battle between the factory Ducatis over the next two laps, including a side-by-side run at the Timmer Chicane, bottling up the pack and allowing a steadily rising Viñales to briefly run third.

Lorenzo began to fade with around eight laps remaining as Viñales became the fourth different race leader when he got by Dovizioso on Lap 19.

Marquez also got Dovizioso and then outbraked Viñales to lead again at the start of Lap 20, with Dovizioso third and Rossi fourth but the rest now losing touch.

That was until Viñales got a run on the outside of Marquez into De Bult on Lap 21, both ran off the circuit onto the asphalt apron, and the Italians Dovizioso and Rossi took over at the front.

Rins and Crutchlow latched back onto the train and Rossi slipped past Dovizioso into the Timmer Chicane, leading only until the start of Lap 22.

The top two then had big moments, prompting Marquez to take back first position and Viñales temporarily third from his Movistar Yamaha team-mate Rossi.

Dovizioso got inside of Rossi at Turn 1 on Lap 25 but took both #04 and #46 well wide, inviting Viñales and Rins past as Rossi briefly dropped back to sixth.

Rins rode past Viñales on the last lap to take second, his best result in the premier class.

Marquez, however, extended his championship lead to 41 points from Rossi and Zarco with a win in a remarkable race.

Rossi attacked Dovizioso into the Timmer Chicane on Lap 26 of 26 but had to settle for fifth, one position ahead of Crutchlow (LCR Honda).

Lorenzo ended up a relative distant 4.46s away from the lead in seventh, with the top 10 rounded out by Zarco (Tech3 Yamaha), Alvaro Bautista (Nieto Ducati), and Jack Miller (Pramac Ducati).

Miller crossed the line in 11th but profited from a two-second penalty added to Iannone’s race time for shortcutting the Timmer Chicane.

Iannone therefore finished 11th on the second of the factory Suzukis, ahead of Pol Espargaro (Red Bull KTM) and Aleix Espargaro (Gresini Aprilia).

Dani Pedrosa was the final pointscorer in 15th after starting his Repsol Honda from 18th.

Round 9 takes place at Germany’s Sachsenring on July 13-15.