Bottas pips Hamilton to pole as Mercedes shine in Austria

Bottas pips Hamilton to pole as Mercedes shine in Austria 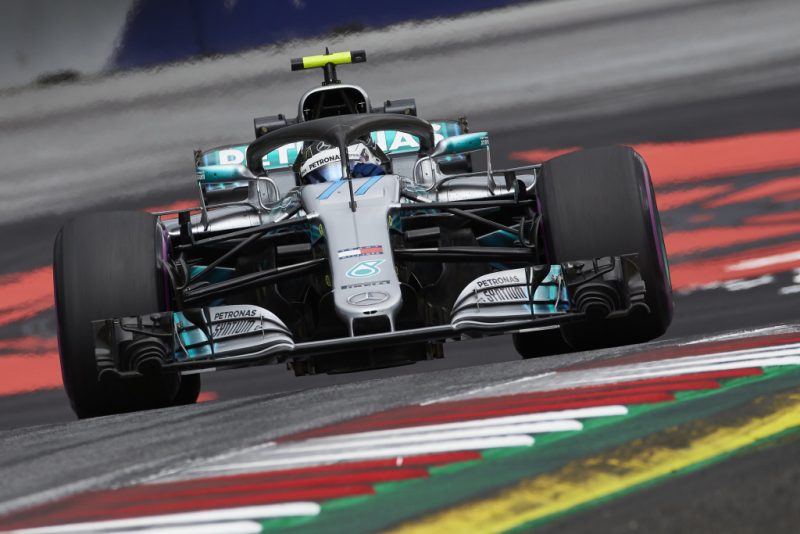 The Finn surged to the top of the times after the first run in Q3 before going on to lower his benchmark to a 1:03.130s, which ultimately proved unbeatable.

Hamilton tried his best to better his opposite number, but was 0.019s shy having been 0.5s adrift after his opening effort that was hampered by running wide at Turn 3.

“In the last run I knew there was a tenth to improve from the first run – managed to find it, apparently I needed it.”

Sebastian Vettel briefly held second spot before it was snatched by Hamilton as the four-time world champion had to settle for third.

The German will start alongside his team-mate Kimi Raikkonen.

However, Vettel did spark a stewards investigation for possibly impeding Renault’s Carlos Sainz earlier in the session.

It proved to be a challenging outing for Red Bull as Max Verstappen was forced to improve on his final lap to leapfrog the impressive Romain Grosjean in the Haas F1 entry to take fifth.

Daniel Ricciardo appeared to struggle throughout qualifying which saw him end up in seventh with the Australian 0.8s away from the pace.

Both Red Bull drivers, who will start the race on supersoft tyres, were aggrieved after the session following a disagreement regarding the track order between the pair during their Q3 runs.

The top 10 was rounded out by Kevin Magnussen (Haas F1), Sainz and Nico Hulkenberg (Renault).

Esteban Ocon emerged in 11th spot as the best Force India runner in what proved to be challenging day for the Silverstone-based team.

Toro Rosso were also unable to challenge the top 10 with Pierre Gasly leading the way in 12th for the Red Bull sister team.

Charles Leclerc was able to progress to Q2 in 13th spot but will start Sunday’s race from 18th position after his Sauber team was forced to change his gearbox before qualifying, resulting in a five-place grid drop.

Fernando Alonso also successfully made it into Q2 but his bid to progress to Q3 was hampered by a mistake on his final run.

The double world champion ran wide at the final turn which resulted in a broken front wing after the Spaniard ran over the sausage kerbs on the corner exit.

Williams’ Lance Stroll will start the race from 14th on the grid.

The opening segment proved hotly contested before it culminated in a surprise exit for Sergio Perez as the Mexican struggled to grapple with a wildly handling Force India.

The Austrian Grand Prix is scheduled to start on Sunday at 2310 AEST.