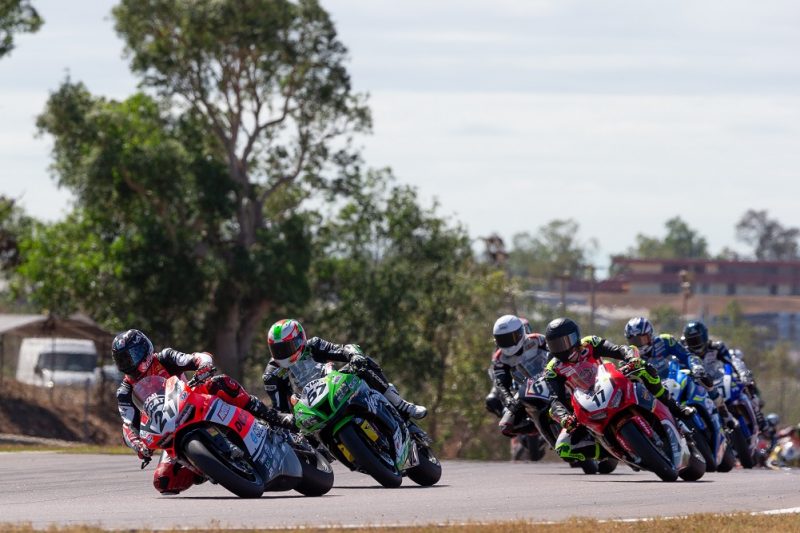 Troy Bayliss has won for the first time in his ASBK comeback but it was Troy Herfoss who took round honours at Hidden Valley Raceway.

The three-time Superbike World Champion led Race 1 from start to finish and was in contention for a repeat in Race 2 before he ran wide and was eventually shuffled back to seventh as Herfoss took victory.

Bayliss qualified on pole and jumped clear when the race was fully restarted after an early red flag.

Herfoss and Bryan Staring battled over second place before the former got past on the main straight on Lap 14.

He closed the gap to Bayliss in the two laps which followed but couldn’t find a way past the #21 Ducati.

The win was the 49-year-old’s first since his final, championship-winning season in World SBK in 2008, after which he barely competed again until this year.

“I owe that performance to my team, it was a big call to bring an old fella on board,” said Bayliss.

“A massive shout out to all our sponsors and the team for putting me on a bike this good. I feel pretty good and that was a tough and physical race.”

The red flag came due to a crash for Jamie Stauffer at Turn 1 on Lap 2, and the Ducati rider did not take the restart.

In Race 2, Herfoss and Bayliss waged a private battle up front before the latter made an error on Lap 16 of 18 and dropped from second to third, giving up a shot at a second race victory and round honours overall.

Herfoss finished just over a second clear of the field on his Honda from Staring, Maxwell, Allerton, and Waters.

In the title race, Herfoss’ lead is out to 29.5 over Maxwell, with Bayliss third.

YMI Superbikes are back in action with the rest of the ASBK program for Round 5 at Morgan Park on August 17-19.