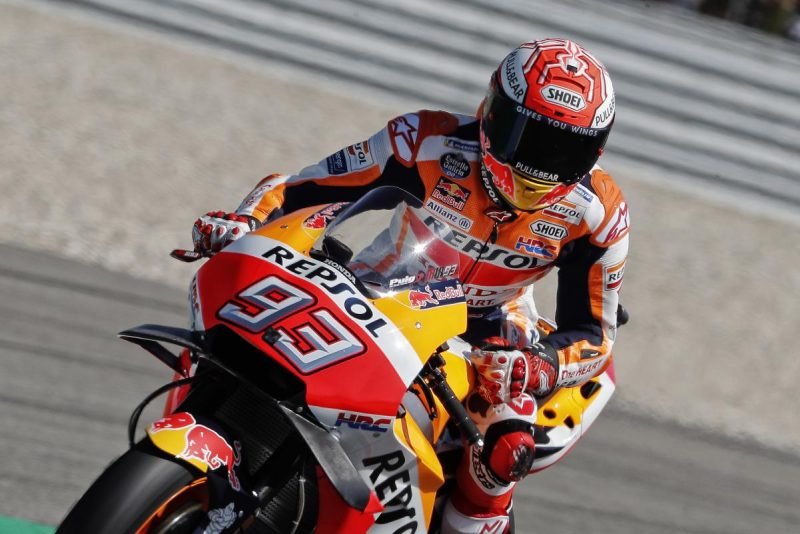 Marc Marquez will start the Dutch round of MotoGP from pole position after a frenetic end to qualifying at Assen.

The Spaniard was the fastest of eight riders who crossed the finish line in quick succession with the chequered flag out, as the ultimate top four was separated by less than a tenth of a second.

Andrea Iannone (Suzuki Ecstar) had been fastest when the 15-minute session timed out, only to be bundled all the way back to ninth on the starting grid for Sunday afternoon’s 26-lap grand prix.

Johann Zarco was at the front of the train in the final moments and went fastest with a 1:33:072s on his Tech3 Yamaha.

He lasted less than a second on pole position before Marquez crossed the stripe to set a 1:32.791s on the #93 Repsol Honda.

Rossi was briefly second-fastest before being edged by Crutchlow as the LCR Honda rider falling just 0.041s short of his factory counterpart.

The pole is only Marquez’s second of the season and represents the first time he will start from first position after incurring a grid penalty in the United States.

Row 2 will be Andrea Dovizioso (Ducati Team), Alex Rins (Suzuki Ecstar), and Maverick Viñales (Movistar Yamaha), Rins having just made it out of Qualifying 1.

Aleix Espargaro put his Gresini Aprilia seventh on the grid next to Zarco, the other Q1 graduate, and Iannone.

Jorge Lorenzo was provisionally set to record a second pole in as many races as the final minute of Qualifying 2 began, but was shuffled all the way back to 10th on the #99 Ducati Team entry.

He will share the fourth row of the grid with the Pramac Ducati of Danilo Petrucci and Alvaro Bautista, who qualified a season-best 12th on his Nieto Ducati.

Jack Miller (Pramac Ducati) was fastest after the first runs of Q1 but couldn’t improve enough on his second tyre set and will start 16th.

Dani Pedrosa was uncompetitive in the first quarter-hour stanza of qualifying, earning only 18th on the grid on his Repsol Honda.

Franco Morbidelli (Marc VDS Honda) is out for the weekend after breaking his left hand in a nasty crash during Free Practice 3.

Race start in Round 8 of the season is Sunday night at 2200 AEST.