Rubens Barrichello has been named in a three-car Strakka Racing line-up for next month’s 24 Hours of Spa.

He will compete in the Pro class in the British team’s #44 Mercedes-AMG GT3, which he will share with Felipe Braga and Christian Vietoris.

Barrichello and Braga are currently rivals in the Stock Car Brasil series while Vietoris is a DTM reserve driver for Mercedes-AMG.

The race will be the Brazilian’s first 24 Hours of Spa and comes off the back of his 24 Hours of Le Mans debut in 2017. 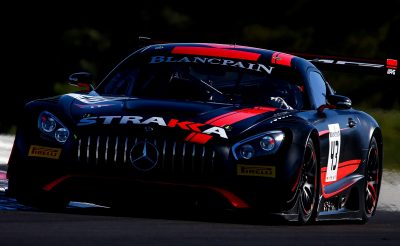 Barrichello will drive for Strakka at Spa

“I am very much looking forward to racing at Spa once again,” said Barrichello, an 11-time grand prix winner.

“This was where I got my first pole position in F1 so it brings back great memories.

“I am still very active with my racing in Brazil and I want to thank Strakka Racing for the opportunity.

“It will be great to race with my good friend Felipe and I am looking forward to sharing the car with Chris. All being well we should prove a competitive line-up.”

The 24 Hours of Spa is the second leg of the Intercontinental GT Challenge after Bathurst, and the fourth of five Blancpain GT Series Endurance Cup races.

The official test takes place on July 3, before the race weekend on July 26-29.