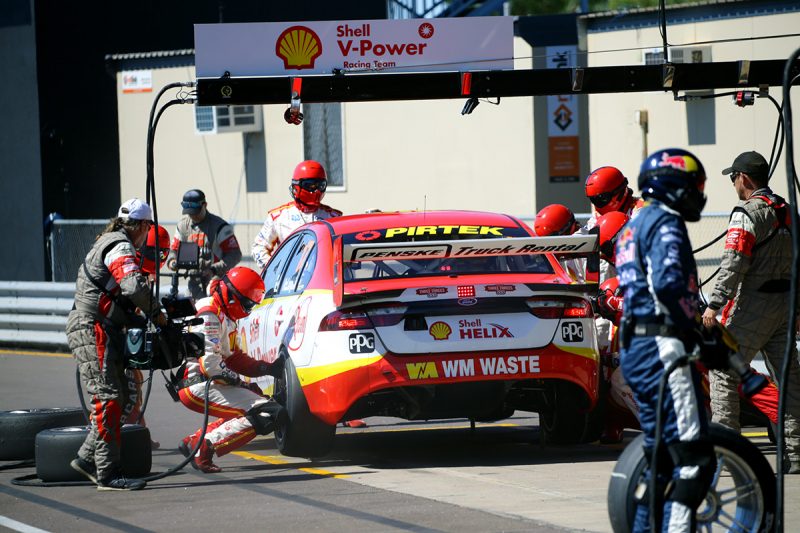 The engine from Scott McLaughlin’s Ford Falcon has been salvaged following a dramatic overheating issue at the CrownBet Darwin Triple Crown.

Smoke poured from the #17 Shell V-Power Racing entry after rising oil temperatures caused a surge in the engine that saw McLaughlin nurse the car home to second in Race 16 at Hidden Valley Raceway.

McLaughlin described the engine as ‘pretty torched’ following the race but the damage is not as bad as first feared following a further inspection of the unit at the squad’s Queensland workshop.

DJR Team Penske applied to Supercars for permission to carry out a through evaluation of the engine as it aims to eradicate the issue moving forward.

The engine has since run on the dyno and is expected to remain in use by the team with fresh componentry fitted as a precaution.

However, it is yet to be determined whether McLaughlin will be fitted with a new engine for next weekend’s Watpac Townsville 400.

“We applied to have the seals removed and we ran the engine on the dyno and it ran fine. We have made some precautionary changes as anyone would do under the same circumstances.

“We will update the components in the engine and it is more likely it will be a spare at the next event but that has not been determined yet.”

Story says the team has identified how the issue emerged and has already started to develop ways to improve its current package in that area.

“There are some steps that we will take including up-speccing some of the ancillary systems to try and avoid that sort of thing from happening again.”

The operation currently leads the teams’ standings by 48 points over Triple Eight, while McLaughlin heads the drivers’ championship with a 161 point margin.