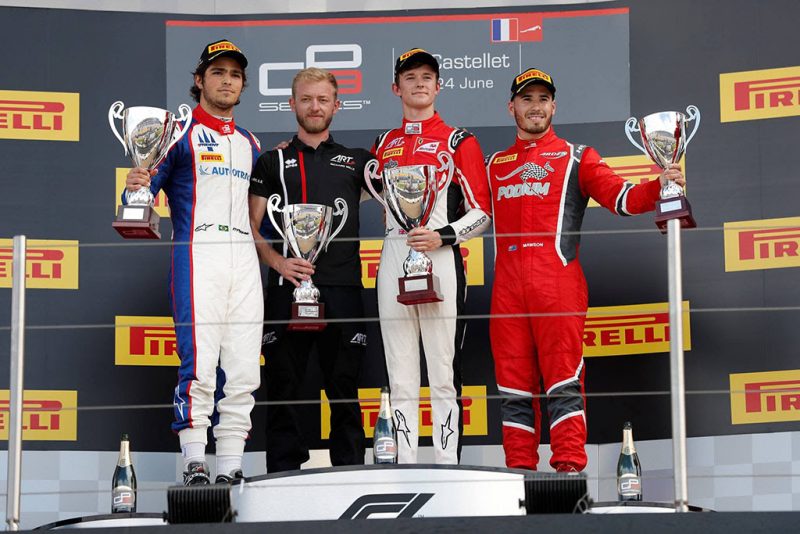 Joey Mawson (right) on the podium

Australian Joey Mawson bagged a maiden podium in Race 2 of the GP3 Series at Paul Ricard, while Anthoine Hubert won the opener after a disqualification for Dorian Boccolacci.

Boccolacci had taken the chequered flag in first position but was stripped of a home victory for failing to provide an adequate fuel sample.

In the second race, Callum Ilott took his maiden GP3 from the reverse grid pole after a duel in the early stages with Pedro Piquet.

Ilott scampered home 3.4s clear of Piquet, with the Brit moving up the order in the championship standings.

Arden driver Mawson, who finished the opener in seventh, started Race 2 from second as a result and lost just the one position despite a Lap 1 off.

Hubert leads the series heading to the Red Bull Ring for Round 3 this weekend (June 29-July 1). 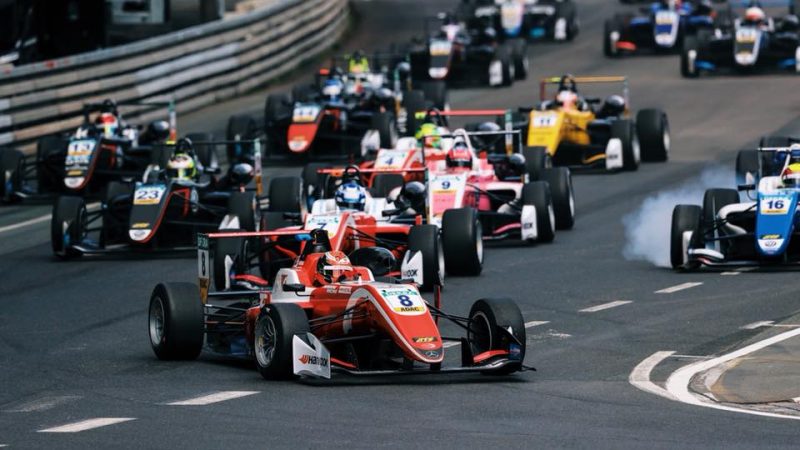 New Zealander Marcus Armstrong claimed a breakthrough victory in the European Formula 3 Championship at the Norisring.

The Ferrari junior led from pole position right to the chequered flag following a strong start.

A Lap 2 safety car was all that stood in the Kiwi’s way, but a clean getaway on the restart saw Armstrong scamper up the road, crossing the line almost three seconds ahead of the competition.

Both drivers emerged under their own steam, with Armstrong inheriting second when another competitor received a post-race penalty.

Ticktum then went on to win a safety car riddled final hit out ahead of Vips, while Armstrong completed the weekend’s running in third.

Armstrong’s performance across the Norisring event elevate him into the championship points lead as the European Formula 3 now treks to Zandvoort for Round 3 from July 14-15. Australian Jack Doohan recovered from a tough start to his British Formula 4 weekend in Croft to finish a best position of third.

Technical issues impeded Doohan’s chances for pole before he was forced to limp back to the pits at the end of the opening lap of Race 1 with further problems.

The Arden driver recovered to fourth in the second Race 2 before improving to third in the final race of the Croft weekend.

Dennis Hauger took out two of the three race wins on offer while Kiern Jewiss claimed the Race 2 victory.

British F4 now goes on its summer break before returning in five weeks at Snetterton from July 28-29. 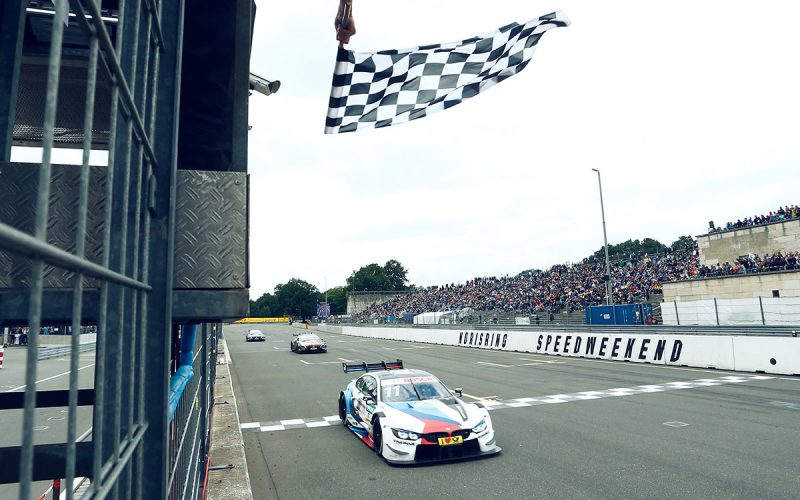 Mercedes and BMW shared spoils in Round 4 of DTM at the Norisring.

Edoardo Mortara turned pole position into a race win during the opening hit-out after emerging from the pit stop sequence out front.

The Italian led home Brit and fellow Mercedes driver Gary Paffett, with Marco Wittmann taking third for BMW after the latter pair took turns at challenging Mortara but could not find a way by.

Jamie Green was the best of the Audis in 11th.

Wittmann was able to carve his way from 7th on the grid in Race 2 to secure victory once the pit stops had cycled through.

Paffett leads the championship, which continues at Zandvoort on July 13-15. 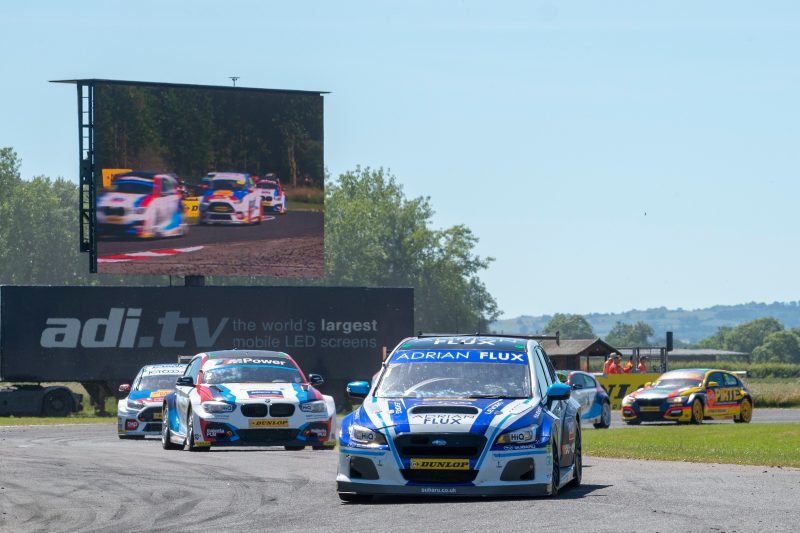 Ash Sutton has taken two wins and Daniel Lloyd the first of his career in the fifth event of BTCC at Croft.

In the second race, Tom Ingram (Speedworks Motorsport Toyota) won three-wide stoush to the first corner from the aforementioned Subarus.

While Plato was handed a drive-through penalty for a jumpstart, Sutton decisively nabbed Ingram on Lap 2, who finished ahead of third-placed Colin Turkington (Team BMW).

Lloyd led all the way in the reverse grid finale, making for his and BTC Norlin Racing’s first race win in BTCC.

Turkington leads the championship by 19 points from Ingram, with the next meeting at Snetterton on July 28-29. Mies managed to hold off a late race charge from Mercedes-AMG driver Raffaele Marciello in the closing stages of Race 1 on Saturday evening to win by 0.6s.

Grasser Racing Team finished third and fourth with their #63 and #19 Lamborghini Huracans respectively.

In Race 2, Riberas led home a WRT 1-2 following issues for a number of other front running cars, leaving the #1 WRT squad to extend its lead at the top of the Blancpain GT Series championship standings.

The Will Stevens/Dries Vanthoor driven Audi claimed second, while Sainteloc Racing and Attempto Racing made it four Audis in the top four.

Blancpain GT teams will now prepare for the Total 24 Hours of Spa, with a test day set to take place on July 3, before the race weekend later in the month. 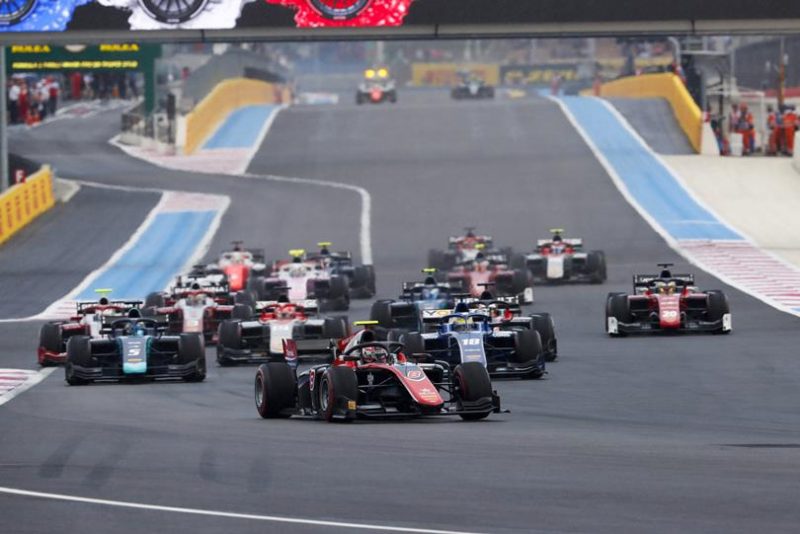 Russell fended off Sergio Sette Camara in the closing stages of the feature race to cross the line first in mixed conditions.

Roberto Merhi initially took third but was disqualified post-race as a result of a tyre infringement, therefore promoting Luca Ghiotto to the podium.

A pass on Louis Deletraz halfway through the sprint race saw de Vries take the lead, with the McLaren junior not letting it up for the remainder of the hit-out.

Techincal problems at the start of the formation lap saw title protagonist Russell finish two laps down in the sprint, while rival Lando Norris struck drama in the feature race when he stalled at the start and went on to finish 16th.

Norris, who recovered to fifth in the sprint race, still holds the championship points lead over Russell, as F2 now heads to the Red Bull Ring this weekend for Round 6. Colton Herta has extended his Indy Lights series lead with a win and second placing at Road America.

Herta (Andretti Autosport) started the opener from third but passed Santi Urrutia (Belardi Auto Racing) as they went through Turn 5 for the first time.

He repeated the feat five laps later to take the lead off Victor Franzoni (Juncos Racing) and drive away with the race.

Pato O’Ward (Andretti Autosport) and Franzoni rounded out the podium.

Franzoni achieved his first win in Race 2, profiting from contact between Urrutia and O’Ward as the former tried a move for first position on Lap 3.

Next up is Iowa Speedway on July 7-8. 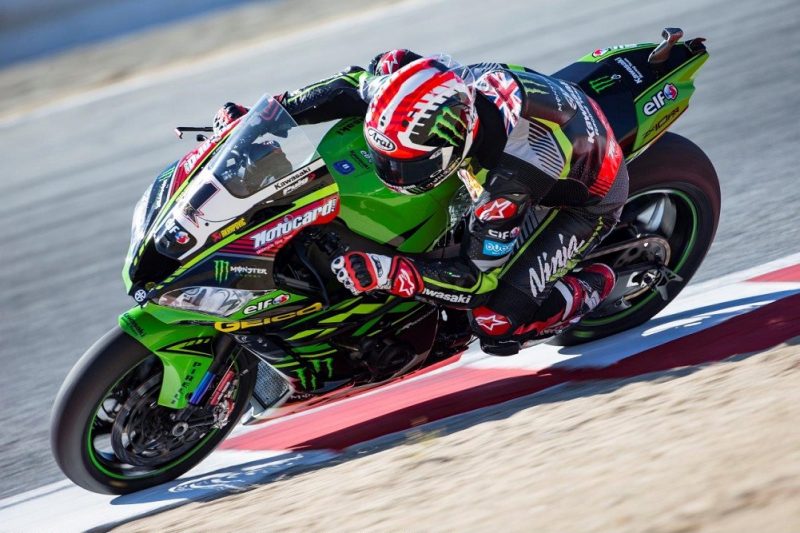 Jonathan Rea has taken two more wins in the United States round of the Superbike World Championship at Laguna Seca.

Chaz Davies (Aruba.it Ducati) led the field away in Race 1 before Rea (Kawasaki Racing Team) made an unsuccessful attempt to pass at the end of Lap 1.

When Davies outbraked himself at the Corkscrew on Lap 7, however, Rea nipped past and went on to win by nearly three seconds.

The quinella was the same in Race 2 despite the grid inversion, with Rea moving from ninth to fifth on Lap 1 before taking over second position on Lap 4.

He passed Eugene Laverty (Milwaukee Aprilia) at Turn 3 on Lap 8 and again rode away with the race.

Davies made the pass for second in the final 10 laps, while Laverty held on to third due to a battle between the Pata Yamahas of Alex Lowes and Michael van der Mark behind him.

Marco Melandri (Aruba.it Ducati) crashed out on Lap 4, after finishing Race 1 in fifth.

Rea’s championship lead over Davies in World SBK sits at 75 points, the equivalent of three race wins, ahead of Round 9 in San Marino on July 6-8. Hayden Paddon made a winning return to his domestic championship in Stadium Finance Rally South Canterbury.

After missing the last round due to WRC commitments, Paddon (Hyundai i20 AP4) won 10 of the 11 stages in South Canterbury and took an overall victory of 4:51.3s.

However, he but had little to show for it at the end of the one-day event when his Subaru WRX developed a mechanical problem which left him 59th overall.

Round 5 is the Gold Rush Rally of Coromandel on Saturday August 18. 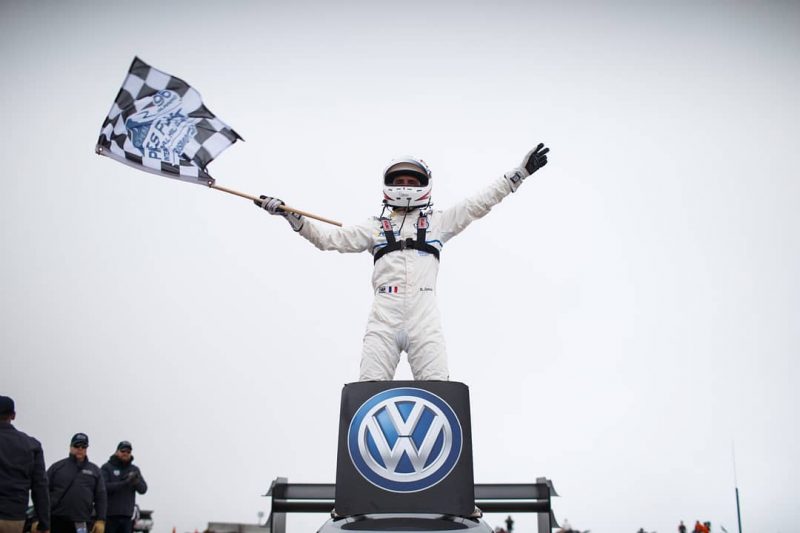 Romain Dumas has won the 2018 running of Pikes Peak in record time in an electric Volkswagen.

The Frenchman completed the climb in 7:57.148s in the I.D. R, breaking Sebastien Loeb’s five-year-old record by over 16 seconds.

Tony Quinn was seventh outright and fourth in the unlimited class.