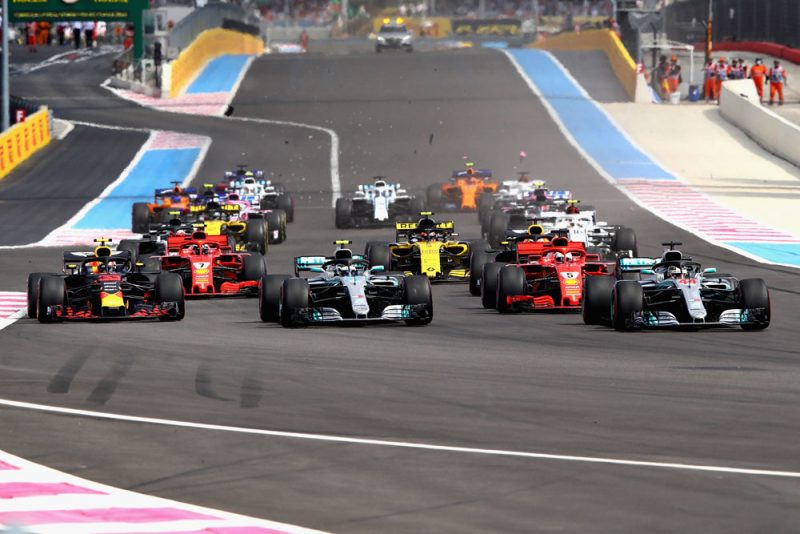 A controlled drive from Lewis Hamilton saw the Mercedes driver cruise to victory in the Formula 1 French Grand Prix.

Starting from pole, the Englishman managed his pace in the opening stages before stretching his legs in the laps prior to his sole pit stop.

Having taken service, the world championship leader resumed control of the race to ease to his third grand prix win of the season.

A strong start from Sebastian Vettel saw the Ferrari driver attack the leading Mercedes, forcing Hamilton to defend into the opening corner.

To the German’s right, Valtteri Bottas proved stronger on the brakes, Vettel locking up and slide into the Finn.

It triggered chaos behind as the field scattered around the spinning cars, Vettel picking up a broken front wing and Bottas a left rear puncture in the clash.

With debris littering the circuit the Safety Car was called for, allowing Bottas and Vettel to catch up to the tail of the field, though the Ferrari driver was slapped with a five second penalty for triggering the opening lap shunt.

A number of drivers took the early opportunity to switch tyres, among them Fernando Alonso who ended up spinning at the restart as Vettel went around the outside of the Spaniard.

Sainz had been a popular victim in the opening stages, falling to Ricciardo and Raikkonen who’d slipped behind the Renault in the opening lap carnage.

Having enjoyed a career best qualifying result on Saturday, Charles Leclerc raced inside the top 10 in the opening stages.

Though the Sauber driver benefited from the opening lap scuffle between Vettel and Bottas, he began applying the pressure to Kevin Magnussen only to make a mistake and fall behind Nico Hulkenberg.

That left the Monegasque driver exposed to the recovering Bottas, dropping behind the Mercedes just a handful of laps later.

Leclerc emerged in 16th following his stop, though with a number of those ahead yet to stop leaving the 20-year-old climbed back to 10th at the finish.

The charging Vettel forced Red Bull to pit second placed Verstappen after 25 laps, emerging from the lane immediately in front of the recovering Prancing Horse, who still had the five second penalty looming over him from the opening lap clash.

Ricciardo stopped at the end of his 28th lap, rejoining behind Vettel as Sergio Perez cruised into the lane with a suspected engine failure which took him out of the race.

When Hamilton stopped after 33 laps he briefly fell behind Raikkonen, who had yet to take to the lane, Mercedes pulling the race leader in as he approached a train of lapped runners.

A lap later, Ricciardo used the grip advantage afforded by his newer tyres to put a move on Vettel, taking a net third as Raikkonen stopped from the race lead.

Vettel was beginning to struggle on the tyres he’d fitted on the opening lap, quickly dropping back into the clutches of his team-mate.

Bottas was facing the same fate, Mercedes biting the bullet and stopping him for a second time though a slow stop, caused by the car dropping from the jack without the right rear fitted, dropped him to ninth.

A lap later Ferrari followed suit with Vettel, who served his five second penalty before rejoining without losing a position.

Strong pace from Raikkonen saw the Ferrari driver close in on Ricciardo, demoting the Red Bull from the final podium position.

The pair engaged in a brief battle, though Ricciardo proved powerless to fend off the challenge for more than half a lap.

A loss of power inside the final four laps saw sixth placed Sainz mugged by Magnussen and Bottas.

Lance Stroll also struck trouble when his front right tyre failed as he turned into the Courbe des Signes at the end of the Mistral Straight.

The stricken Williams triggered a Virtual Safety Car on the penultimate lap, which was cleared midway around the final lap to ensure Hamilton saw the chequered flag under proper racing conditions.

Victory for Hamilton also marked the first time Mercedes had won the French Grand Prix since Juan-Manuel Fangio headed a 1-2 ahead of Karl Kling at Reims in 1954.

He now leads the championship by 14 points over Vettel, with Ricciardo 35 points further back in third.