Hamilton leads the way as F1 returns to France

Hamilton leads the way as F1 returns to France 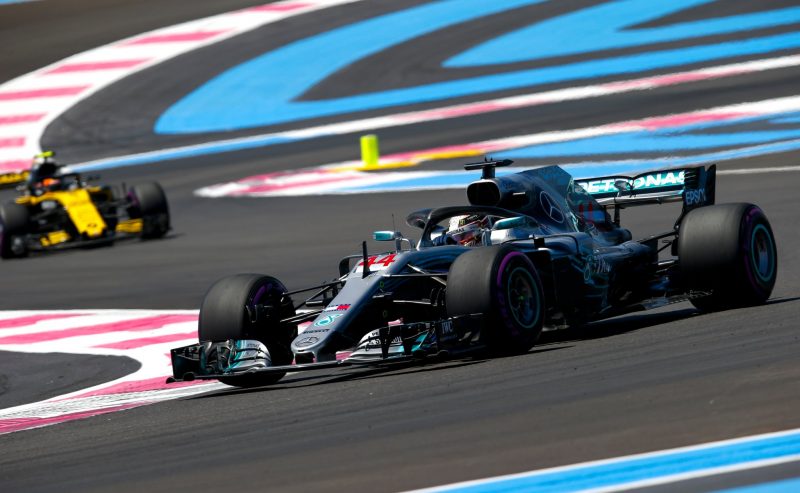 Lewis Hamilton has ended Friday practice fastest at Le Castellet as Formula 1 made its first appearance in France in a decade.

The Mercedes driver ended the day seven tenths of a second clear of Daniel Ricciardo and Max Verstappen, though posted a slower time than he’d managed in the day’s opening session.

With times down across the board in Free Practice 2, Hamilton lost less than most as second fastest Ricciardo dropped nine tenths over his FP1 best.

Valtteri Bottas ended the day second fastest overall, despite tumbling to seventh in Practice 2 as he sat out the second half of he session.

A fluid leak forced Mercedes to remove the floor on his car as they worked to find the source, which took the remainder of the session.

Free Practice 2 was interrupted when Sergio Perez shed the left rear wheel on his Force India at the halfway point in the session.

The Mexican had started a flying lap before the wheel parted company with the car as he turned left onto the Mistral Straight, drawing the red flag.

Romain Grosjean climbed up the order as he completed his ultrasoft run prior to the incident, the Haas driver sixth in the session.

Having not hosted an official Formula 1 session since 1990, the Paul Ricard circuit bore witness to plenty of spins, including offs for Kimi Raikkonen, Esteban Ocon, Fernando Alonso.

There was drama for Marcus Ericsson earlier in the day after he crashed out late in Practice 1.

The Swede lost control at Turn 11 before coming to rest in the tyre wall, for the rear of his car to catch fire in the impact.

The right hand bodywork sparked alight as the 27-year-old worked through the shutdown sequence and begun to climb free, unaware of the fire after losing the right side mirror in the crash.

Though extinguished quickly by track side officials the damage to the chassis ruled the Sauber out of the remainder of the day’s running.

Practice continues on Saturday ahead of qualifying, which is scheduled to begin at midnight AEST.