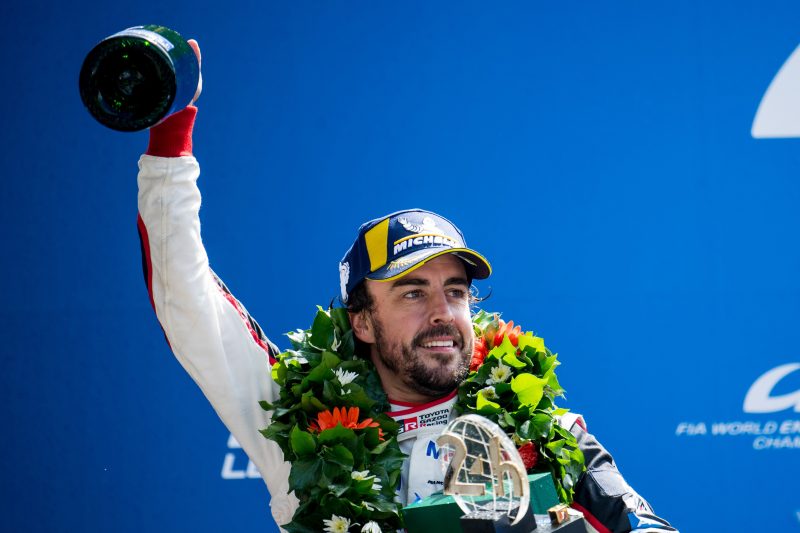 Fernando Alonso after winning the 24 Hours of Le Mans

Fernando Alonso has suggested winning the Formula 1 Monaco Grand Prix is the easiest of the three legs of motorsport’s unofficial triple crown.

The Spaniard has twice won in Monaco, in 2006 and 2007, and last weekend claimed victory at the 24 Hours of Le Mans in his maiden attempt.

Last year he also competed in the Indianapolis 500 in what was his first attempt at the flagship IndyCar event, the last of the three events Alonso needs to win to become the second made to achieve the treble.

“I think they are difficult to compare,” Alonso responded when asked which of the three is most difficult.

“They are all special events and they are all difficult to win, in a way.

“Probably the easiest will be Monaco because if you are in the best package possible that season and you put in a lap on Saturday, 99 percent of the win is there so that’s probably out of your hands.”

The two-time F1 world champion also suggested the sheer scale of competing at Le Mans made it a significant challenge, regardless of what competition was on offer.

“I think in Le Mans it was different because the race is so hard and so demanding that whatever package you have, you need to still fight throughout the race and you need to still deliver the perfect execution of the race,” he said.

“The team of our boss Zak Brown (United Autosports) was third (in LMP2 class) at the end of the race and in qualifying it was 14th,” he added.

“That’s how hard Le Mans is, and how unpredictable it is.

“In Formula 1 we are definitely missing that. We are all sitting here and we know that maybe we could fight for seventh in qualifying and for seventh in the race. That’s the biggest problem.”

With two of the three legs of the triple crown now successfully completed, Alonso remains coy on whether he’ll return to Indianapolis next year in an attempt to complete the set.

“As I said last year when I entered the Indy 500, that was a very attractive target, to achieve the triple crown and to be a little bit, let’s say, a more complete driver, not only driving Formula 1 cars.

“Yeah, obviously the Le Mans victory it puts a little bit closer that target, but I will think and I will see what I do next year.”