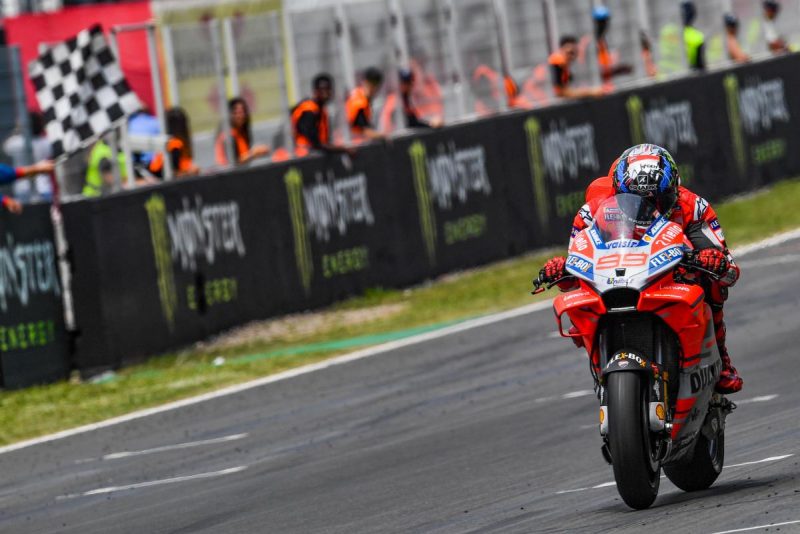 Jorge Lorenzo has ridden to a thorough victory in the Catalan MotoGP just a fortnight after breaking his duck for Ducati.

The pole-sitter was better by Marc Marquez when the lights went out and dropped to third at the opening corners but breezed back into the lead at the beginning of Lap 2 and stayed there for the duration.

Marquez managed to move a full race clear in the championship despite having to settle for second, and Valentino Rossi finished on the podium for a third grand prix in succession.

At the start it was Marquez who moved ahead from the middle of the front row as a bold Andrea Iannone nabbed second from Lorenzo through Turn 1/Turn 2.

Iannone went for the lead at Turn 10 but was too deep on the Suzuki entry and dropped to third.

Lorenzo then used his Desmosedici’s superior grunt to get by Marquez on the run to Turn 1 on Lap 2.

Just behind, Andrea Dovizioso similarly blazed past Iannone to move into third, allowing Rossi to also get by at Turn 1.

Dovizioso kept with the top two until he ran Bike #04 wide at Turn 4 on Lap 4.

The Italian never quite recovered the time he lost before his race came to an end in losing the front of the factory Ducati at Turn 5 on Lap 9.

By then, Lorenzo was creeping away from Marquez and the lead was a full second for the first time on Lap 11.

He put another half a second on his future team-mate next time around and the #93 Repsol Honda ran a lonely second thereafter.

Such was Lorenzo’s consistency, he was only twice slower than a 1:40.5s lap from Lap 2 to Lap 21, before drifting slightly in the three which remained.

The Spaniard’s full 25-point haul in conjunction with Dovizioso’s third DNF in four races sees the two now tied on 66 championship points with the former ahead in seventh position by virtue of his two wins.

“Winning a second victory consecutively is amazing, no?” said Lorenzo.

“It’s amazing how things change in such a small time.”

Rossi (Movistar Yamaha) gained two positions at the start to sit fifth early on before picking off Iannone and inheriting the final podium position from Dovizioso.

He continues to run second to Marquez in the title race.

Cal Crutchlow gained six positions from his starting berth to claim fourth on his LCR Honda.

The Briton closed up to then-fifth-placed Dani Pedrosa on Lap 9 and they soon overtook Danilo Petrucci in quick succession.

Crutchlow, however, took until Lap 18 to pass the outgoing factory Honda rider thanks to a great run off Turn 3.

Pedrosa finished fifth, having leapt from 11th to sixth on the first lap alone.

Maverick Viñales did the opposite, plummeting from fourth to 10th with a poor start, and he could only drag his Movistar Yamaha back to sixth.

There were only 14 finishers, of which Jack Miller (Pramac Ducati) was not one after retiring with 15 laps completed.