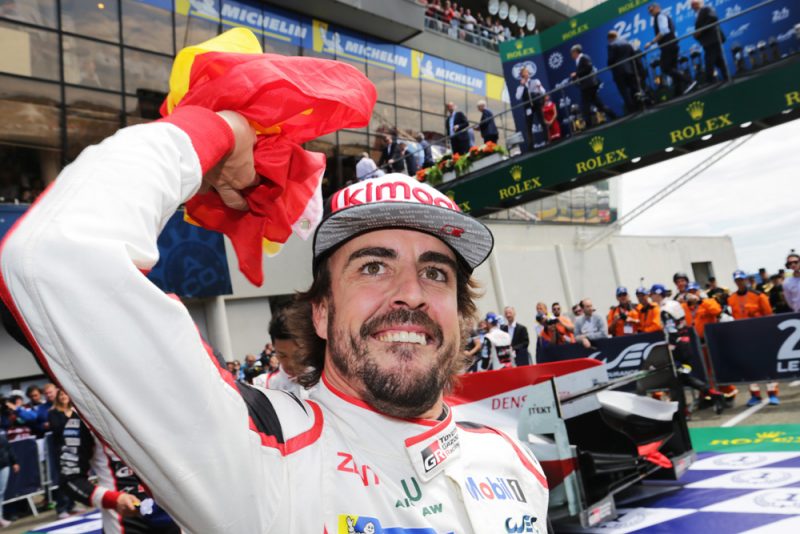 Fernando Alonso admitted he was stressed watching the final stages of the 24 Hours of Le Mans as his Toyota co-driver Kazuki Nakajima raced to the chequered flag to win the event.

Toyota dominated the race, leading every lap with both factory cars circulating almost together for 23 hours of the French classic.

It was only in the final hour when Kamui Kobayashi missed the pit entry and was forced to trundle back to the pit lane conserving fuel that Alonso’s #8 entry emerged as the clear leader.

By that stage Alonso, Nakajima, and Sebastien Buemi had charged from almost a lap down following a stop-go penalty for speeding in a slow zone overnight to hold a slender lead heading into the closing stages.

Following the drama for the sister car, and a penalty which followed, it left the Alonso/Nakajima/Buemi entry more than a lap clear at the front, needing only to continue circulating to win.

“It’s an amazing feeling,” Alonso said of the win.

“Maybe still a little bit in shock because we were so focused on the race, so stressed at the end watching television.

“I’m not used to watching my car racing, I’m normally in it. It was quite a tense 24 hours, with two cars within one minute more or less the whole race.

“I didn’t know if watching television was better, or sleeping, or MotoGP was on at that time… Maybe MotoGP was the best idea.”

The two-time Formula 1 world champion admitted fearing a repeat of the 2017 Indianapolis 500, where he came close to winning only to miss out in the closing stages.

“We were leading the race, close to winning, but we missed the opportunity,” he explained.

“Here, we were leading the race and I was worried I would miss the opportunity again but here we achieved it.”

Indianapolis is now the only missing link in Alonso’s pursuit of the unique motorsport triple, a feat achieved only by Graham Hill.

“It’s definitely (a) very attractive target to try the triple crown and see if you can be a better driver and a more complete driver,” he said.

“So, to be a better driver and more complete, you need to win in every series against the specialists in that series.

“To beat the specialist in oval racing or here (against) endurance guys who know every little trick here, to be able to come here and be at that level is a very attractive target.”

Alonso is just the fifth driver to win both the 24 Hours of Le Mans and an F1 title since the world championship began in 1950.

The Spaniard is also just the 13th driver in history to have won two legs of the famed triple, an exclusive group which also includes Juan-Pablo Montoya, Jacques Villeneuve, Mario Andretti, Jim Clark, Bruce McLaren and pre-war great Tazio Nuvolari among others.