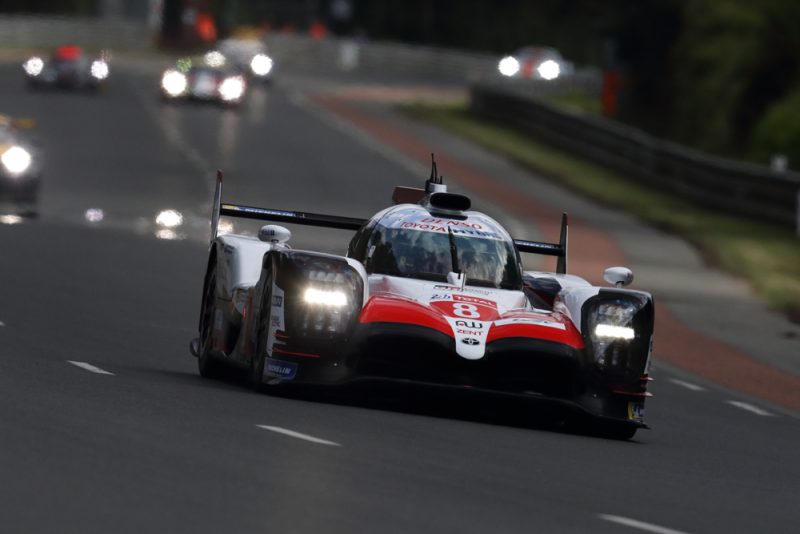 Toyota has stretched its legs at the front of the 24 Hours of Le Mans with both cars more than 10 laps clear of their nearest rivals after 18 hours of the event.

Fernando Alonso’s #8 entry chased down the sister entry, retaking the lead with eight and a half hours remaining.

It was the first time the car had led since Sebastien Buemi was slapped with a 60 second stop-go penalty some six hours earlier.

Once ahead, Alonso began opening a gap before climbing from the car and handing it back to Buemi.

In the LMP2 class, G-Drive continued to head the class, running as high as fifth overall as several of the LMP1 runners struck trouble.

Only the two Toyotas and two Rebellion entries remained at the head of the flagship class, with G-Drive three laps down on Andre Lotterer’s fourth placed Rebellion.

Crashing out of the race was the second G-Drive Racing entry of Australian James Allen, Jose Gutierrez, and Enzo Guibbert.

Gutierrez lost control in the Porsche Curves with 11 hours left in the race, the car too badly damaged to continue.

The Porsche GT Team continued to dominate the LMGTE-Pro class, with the squad’s cars running 1-2 ahead of a pair of Chip Ganassi’s Ford GTs.

Leading the class was the #92 of Michael Christensen, Kevin Estre, and Laurens Vanthoor who held the thick end of a lap of Gianmaria Bruni, Frederic Makowiecki, and Richard Lietz in the #91 Porsche.

Scott Dixon, Ryan Briscoe, and Richard Westbrook ran sixth in class, the third Ford GT on the road and within touching distance of a class podium as the race entered its final quarter.

The same could not be said for Earl Bamber, who continued to circulate with co-drivers Patrick Pilet, and Nick Tandy down in 14th in class, seven laps off the pace.

The sister car crashed out with an apparent right rear failure in the Ford Chicane with just under eight laps to run, though there were no such concerns for the Campbell entry which held almost a lap advantage over the Spirit of Race Ferrari in second.

Circulating a dozen laps off the pace were early class leaders Ban Barker, Mike Wainwright, and Aussie Alex Davison after suffering an early puncture followed by an off at Indianapolis inside the opening two hours of the race.

The Porsche Curves proved a hot spot for incidents, with the #10 Dragonspeed entry coming unstuck in the complex, and so too the #82 BMW Team MTEK entry which was forced out as a result of the damage it sustained.

All but four cars remain in the race, though five others are stopped on track without having been formally retired, as the race heads into its final six hours, the chequered flag set to fall at 1500 local time (2300 AEST).