Toyota, Porsche in control at half distance in Le Mans

Toyota, Porsche in control at half distance in Le Mans 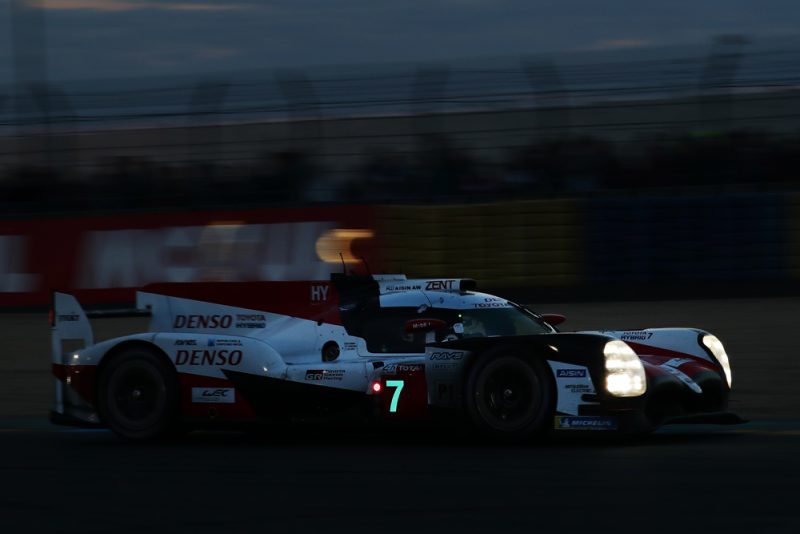 Toyota has widened its advantage at the front of the 24 Hours of Le Mans LMP1 competition while Porsche has stamped its authority over both LMGTE classes.

Having led every lap of the race, the two Toyotas continue their domination of the race outright, with the #7 entry of Kamui Kobayashi, Mike Conway, and Jose Maria Lopez more than a minute clear of the sister car.

There had been little between the two cars before Sebastien Buemi was handed a 60 second stop-go penalty for speeding in a slow zone during the 10th hour of the race.

It saw the #8 entry drop almost a complete lap behind the front of the race before clawing the time back as the race approached half distance.

The next closest car on track, the first of two Rebellion Racing entries, is five laps off the Toyotas’ pace.

The Gulf Racing entry of Davison, Ben Barker and Mike Wainwright continued to circulate down the order, 52nd overall and four laps off the pace.

Porsche continued at the head of the LMGTE-Pro class too, with the #92 Porsche GT Team entry heading the team’s second car.

Australian Ryan Briscoe ran down the order in sixth in the #69 Ford GT he shares with Scott Dixon and Richard Westbrook.

G-Drive remained entrenched at the top of the LMP2 class, the #26 car of Roman Rusinov, Andrea Pizzitola, and Jean-Eric Vergne comfortably clear of the #36 Signatech Alpine Matmut effort.

Running down the order, James Allen, Jose Gutierrez, and Enzo Guibbert continued to circulate three laps off the pace in the second G-Drive entry.

The forecasted rain failed to arrive, though a number of slow zones interrupted running after a number of incidents.

The most notable was a bizarre lose from the #17 SMP Racing entry in the middle of the Porsche Curves, the car turning right sharply as it left the road and skated over the grass and into the barrier.

Matevos Isaakyan was behind the wheel and worked to repair the car at the trackside before trying to limp it back to the pits, only for the engine to catch fire just metres after being restarted.

It forced the car out of the race, while a slow zone originally covered retrieval of the crashed car before a second covered its retrieval after Isaakyan had tried to drag it home.

The race continues with sunrise set for 0600 local time (1400 AEST) as it moves into its second half.