Tickford forced to test in public at Darwin

Tickford forced to test in public at Darwin 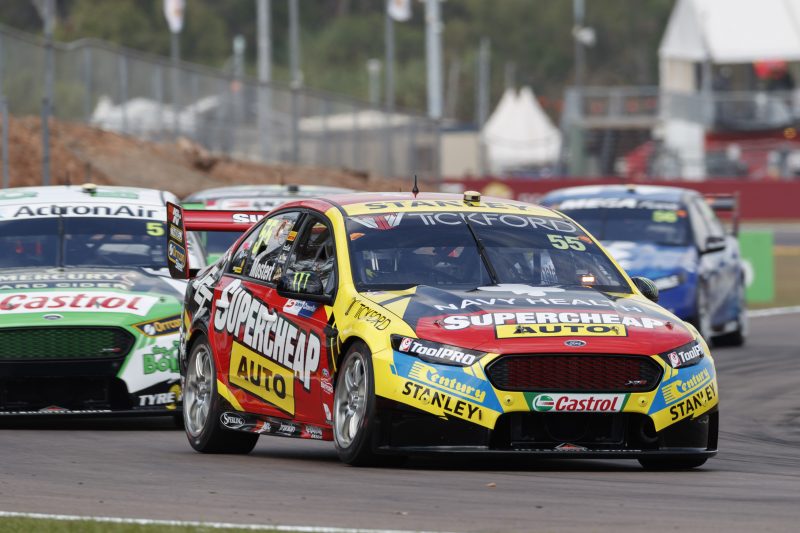 Tickford Racing has been forced to test in public according to boss Tim Edwards as the team strives to return to the front of the grid at the CrownBet Darwin Triple Crown.

The Melbourne operation has undertaken an aggressive approach at the Top End this weekend in a bid to unearth performance improvements following a disappointing start to the season.

Prior to this weekend, the four-car Ford outfit had scored one podium finish, while all of its drivers were outside the top 10 in the championship standings.

After a productive test day last week, the squad were armed with several items to test on its cars at Hidden Valley although Saturday proved another trying day for the team.

However, Edwards believes there are signs of progress despite a lack of results in Saturday’s Race 15.

Cameron Waters was the team’s best performer in 12th, having climbed from 18th on the grid, although his run was hampered by contact from James Golding at the start.

Chaz Mostert came home in 17th three positions ahead of Mark Winterbottom, who was an innocent victim in the Golding/Waters clash, while Richie Stanaway was 23rd.

“We’re not looking for seconds, we’re looking for very small margins these days, and it seems like everything that can go wrong is going wrong for us,” Edwards told Speedcafe.com.

“Cam had fantastic race pace then, got back up to 12th, which was pretty good after being punted off at the start of the race, so you add back in the time that he lost then and he (would have been) right in the mid-top 10.

“So it’s not all black armbands, we’ve got to be careful we don’t try and reinvent the wheel.

“We’ve gone very aggressive with some of the things we’re testing this weekend, we’re forced to test in public, that’s just the nature of this category, and then there’s always the inherent risk of doing that.

“But the positive I take from it is that they actually feel like they’re making headway with the car.

“Everything you change, you fix one thing but it’s caused a problem somewhere else; well now you’ve got to figure that one out and it’s not like you’re testing and we’ve got a week of running around where we can find all those little bits and pieces to address our new problems, so to speak.

“I mean, when you call them ‘problems’, you’re actually talking about such small things on the car, little traits and little behaviours of the car, so we’re just trying to dial that out.

“It’s certainly not great, it’s pretty hard at the moment for everybody, and keeping everybody positive, but we do feel like we’re making progress, which is the positive.”

Edwards admits his team is unlikely to score a victory in today’s conclusion of the Darwin Triple Crown given where its package is currently compared to its rivals.

“We’re definitely making progress. Are we going to be standing on the top step on Sunday? No,” Edwards continued.

“That is not where our car’s at, at the moment, but I think definitely (it will be) moving forward, so the first step’s to regularly get ourselves back in the top 10 and then we can build from that.

“And then we’ve got a good platform to work from, and then it’s just fine tuning, and that’s sort of how you manoeuvre around once you’re up there.”

Mostert says he plans to treat today as a test day to gather vital information to improve his Falcon FGX.

“We really need to use Sunday as another test day for us, keep trying to get more data, keep throwing things at it,” said Mostert.

“At least there’s a long path that we can go with this direction instead of actually being stuck at the end of the path like we were on some other weekends, so I’m excited.”