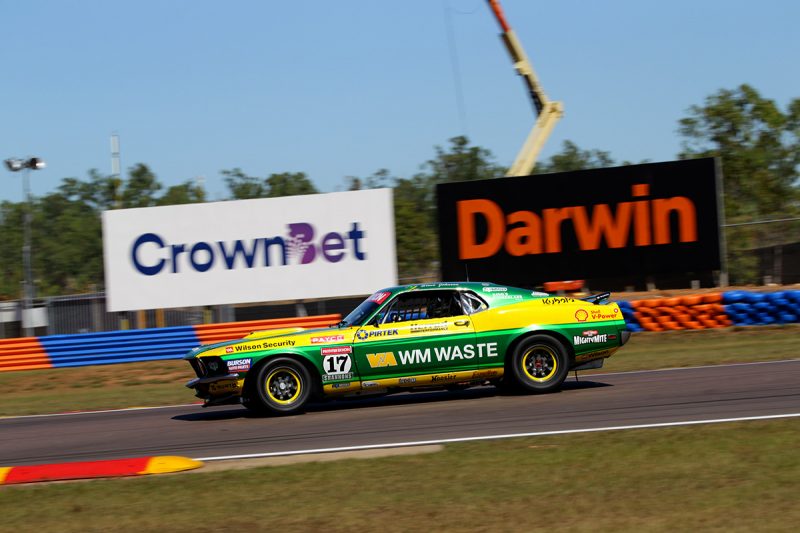 Johnson edged Adam Bressington at the start of Race 11 of the season as Bowe jumped from seventh to third.

The #17 Mustang’s lead was over a second at the end of Lap 1, by which time Bowe had cleared Bressington, and peaked around 2.3s before halfway.

Johnson went on to take a comfortable win despite Bowe whittling down the margin in the last few laps, while Bressington was nine seconds further back in third and Jim Richards fourth.

Bowe set up his next race with yet another impressive outside move at the first corner, but this time it was for first position.

He gapped Johnson by multiple tenths on most laps and ultimately took the #18 Torana to the chequered flag nearly eight seconds ahead.

Johnson nevertheless won the round for the fourth year in row at Hidden Valley and extended his series lead to Bowe over the course of the weekend.

Richards was fifth in his Falcon Sprint, having run third for the first six laps before an error at Turn 1 opened the door for the Camaros of Bressington and Mark King.

Round 5 supports the Watpac Townsville 400 for the first time on July 6-8. Bryce Fullwood was a home town winner in the final race of the Drive the NT Challenge, his first round in Aussie Racing Cars.

While the first three races featured multiple positional changes at the front, largely due to Hidden Valley’s 1.1km main straight, Fullwood led all 11 laps of Race 4.

Woods, a former front runner in the series who was making a cameo appearance in Darwin, took out the reverse grid race from seventh on the grid.

Ben Wilcox, Leigh Bowler, and then Paul Morris had all been at the front by the time a third of the 14-lapper had been run.

Woods rounded up both Morris and Bowler at Turn 1 to take over first position on Lap 7, only for Morris to hit back and Joel Heinrich follow him past two laps later.

Woods quickly re-passed Heinrich and then slipstreamed by Morris at the start of Lap 10, with the ensuing battle behind allowing him to pull clear.

Morris ran off and decisively handed second to Heinrich, with Bowler third and Justin Ruggier, who won Races 1 and 2, out early with a fuel drama.

After the exhibition round in the Top End, Aussie Racing Cars will race for series points again at the Coates Hire Ipswich SuperSprint on July 20-22.

Robert Braune went three from three after taking out the final race of the weekend in the local Improved Production/Commodore Cup/HQ Holden supports.

Braune, steering a BMW E30, led from start to finish, crossing the line ahead of Tim Playford (Mazda 808) while Ross Salmon (HSV Clubsport) rounded out the podium.

Mick Uebergang (Mazda 808) ran up the front for much of the race but was caught out in traffic during the latter stages and found the gravel at Turn 10, dropping out of third at the time.