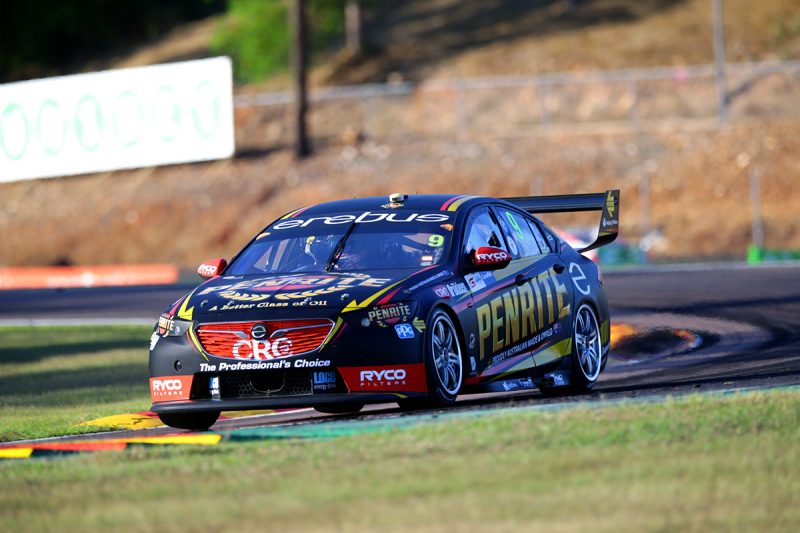 David Reynolds has taken out Race 16 of the Supercars season at the CrownBet Darwin Triple Crown while Scott McLaughlin was runner-up after surviving a mechanical scare.

Reynolds shot from fourth on the grid to lead into the first corner with a sensational outside move and was not seriously challenged thereafter.

McLaughlin popped out in second after the final round of pit stops and managed to hold out Jamie Whincup at the end, despite his Falcon dropping oil mid-race.

Reynolds made the best start of those at the top of the grid but found his path blocked when McLaughlin moved immediately alongside Rick Kelly from the outside of the front row.

He jinked right and braked so much later that the #9 Erebus Penrite ZB Commodore had a clear lead by the time they made the Turn 1 apex.

Kelly (#15 Castrol Nissan Altima) slotted into second position from McLaughlin, Garth Tander gained two positions at the start to take up fourth, while Jamie Whincup and Nick Percat were fifth and sixth respectively.

Reynolds steadily gapped the field while the highest positional change during the first stint was that for fourth, when Tander appeared to let Whincup go at Turn 5 on Lap 8.

McLaughlin applied some pressure to Kelly around the Lap 10 mark before dropping away but continued to circulate in third position.

Percat pitted at the end of Lap 16 and the leader was in two laps later, by which time the gap between #9 and #15 was around 2.7s.

Kelly and Tander responded next time around, slotting in behind Percat, and they were split by McLaughlin again when the #17 Shell V-Power FGX Falcon took service at the end of Lap 20.

After some delay, Kelly and McLaughlin got by Percat on Lap 22, just as the first pit stop cycle completed.

The order by that point was Reynolds, a short-filling Michael Caruso, Kelly, McLaughlin, Percat, a longer-filling Whincup, and Tander, with Shane van Gisbergen ninth after starting 11th.

Despite taking on approximately an extra 13 litres, Reynolds’ margin over Kelly was still around 2.4s and the pole-sitting Altima was coming under pressure from McLaughlin.

The championship leader would soon have worries of his own, however, when Car #17 began breathing oil as engineer Ludo Lacroix warned of high oil temperature.

Kelly seemed to find a turn of pace around the halfway mark of the 70-lap encounter, edging away from McLaughlin while chipping away at Reynolds’ advantage.

McLaughlin, Whincup, and Percat pitted from third through fifth at the end of Lap 36, Whincup missing a chance to jump #17 when he stalled as the #1 Red Bull HRT ZB Commodore was dropped.

Kelly stopped a lap later with his deficit to the lead at 1.95s but resumed behind Car #1.

Reynolds took his final stop after Lap 38 and while he also bobbled while leaving his pit box, Car #9 was still around four seconds to the good with McLaughlin best of the rest.

The smoke from #17 began to clear and the Kiwi caught a break with a Safety Car for debris called on Lap 55, wiping out what was then a six-second gap.

Van Gisbergen had not long sliced past Tander given that the #97 Triple Eight ZB Commodore had been fitted with new tyres on its working side on Lap 46, nine laps later than the last stop for the #33 Wilson Security ZB Commodore.

McLaughlin and Whincup cleared the lapped Macauley Jones (#4 DrillPro ZB Commodore) before the first corner upon restart, but Reynolds already had a lead of 1.29s when they crossed the stripe again.

He continued to creep away and ultimately took a second win of the season.

“Pretty much business as usual for me,” said Reynolds.

“I always try and get the best starts I can and just hung my balls out at Turn 1 and went a bit deep into (Turn) 1 and it paid off and that’s what set up our race.

“We had awesome pit stops and strategy, my car was amazing today, couldn’t fault it, magnificent.”

McLaughlin had a fight on his hands late on the piece but managed to stave off Whincup and grow his championship lead to 161 points.

He is followed in the title race by van Gisbergen, who finished fourth.

The 2016 champion quickly passed Percat after the restart before a bigger battle to overtake Kelly, who ended up fifth.

Will Davison (#230 Milwaukee FGX Falcon) finished 14th after a third stop under Safety Car for tyres had little net effect.

Her #78 Harvey Norman Nissan Altima had been bumped off by Anton De Pasquale as he attempted a pass.

The rookie finished 15th in the #99 Erebus ZB Commodore, with stewards opting to take no further action.

Cameron Waters was a non-finisher when his #6 Monster Energy FGX Falcon’s energy failed during the Safety Car.

Lee Holdsworth’s race came to an end at the same time when the #18 Preston Hire ZB Commodore threw off its front undertray after significant splitter flap.

The next event of the 2018 Virgin Australia Supercars Championship is the Watpac Townsville 400 on July 6-8.