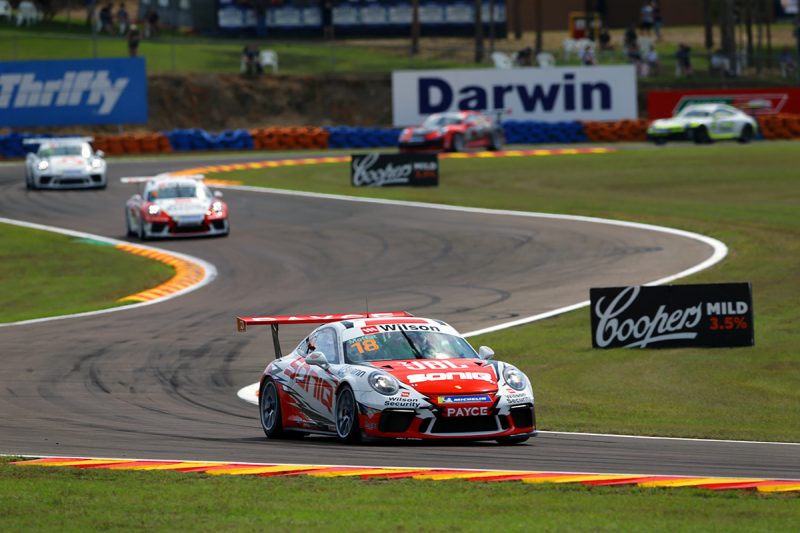 James Moffat has won the third and final race of the weekend for Porsche Wilson Security Carrera Cup Australia in the endurance format as series leader Jaxon Evans struggled.

Moffat put a critical move on Dylan O’Keeffe in the dying stages of the race to seal a first victory of the campaign ahead of O’Keeffe and Michael Almond, who benefited from Evans’ troubled run.

After being involved in a start-line crash earlier in the day, David Wall’s and Dale Wood’s cars were repaired between races, with Wall recovering to finish fourth and Wood sixth.

O’Keeffe and pole-sitter Evans got away equally off the front row of the grid and went head-to-head through Turn 1 as O’Keeffe hung it around the outside.

The young Melburnian eventually prevailed after running side-by-side with Evans until Turn 5 where O’Keeffe slipped up the inside, with the former running off the road on the exit and dropping to fourth.

This left Sonic Motor Racing’s Jordan Love in second and Moffat in third as O’Keeffe began to skip off out front.

A small mistake from Love out of the last corner on Lap 5 meant he was vulnerable down the main straight, with Moffat seizing the opportunity and putting a move down the inside at Turn 1 to take second.

Love then fell into the clutches of Evans before the latter got by on Lap 9 to grab third, as Almond also found a way by his team-mate, demoting Love to fifth.

Further back in the field, Wall and Wood were making progress from the rear of the grid, already up to 10th and 14th at the conclusion of the first 10 laps.

Moffat began to edge closer to race leader O’Keeffe in the second half of the race as the pair exchanged fastest laps.

Cameron Hill and Josh Hunt clashed at Turn 10 when the former made contact with the rear of Hunt’s car, damaging the radiator of Hill’s machine and forcing him to pull off to the side of the track.

Up front, the top three closed up as Evans caught onto the back of the leading duo before a Safety Car was deployed when Love was unable to move from the Turn 1 escape road after locking up and running wide.

The race restarted with five laps to go and it was Evans who pounced on Moffat to snap up second and then began breathing down O’Keeffe’s neck for the lead.

He then proceeded to make a move for the top spot down the main straight, but O’Keeffe pushed Evans right to the inside wall, who then ran on at Turn 1 under braking.

Moffat was then in the box seat and made the most of the opportunity to get by O’Keeffe at Turn 5 in the closing stages, just as Evans had a spin on the exit of the first corner to drop him even further back to 16th at the chequered flag.

Stephen Grove benefitted from a mistake for Pro-Am race leader Adrian Flack on the restart to take the class win in eighth outright.

O’Keeffe took out the overall round win.

Round 5 of Carrera Cup Australia will take place at the Sydney SuperSprint from August 3-4 where the field will be joined by Carrera Cup Asia in a joint event similar to that of 2016.