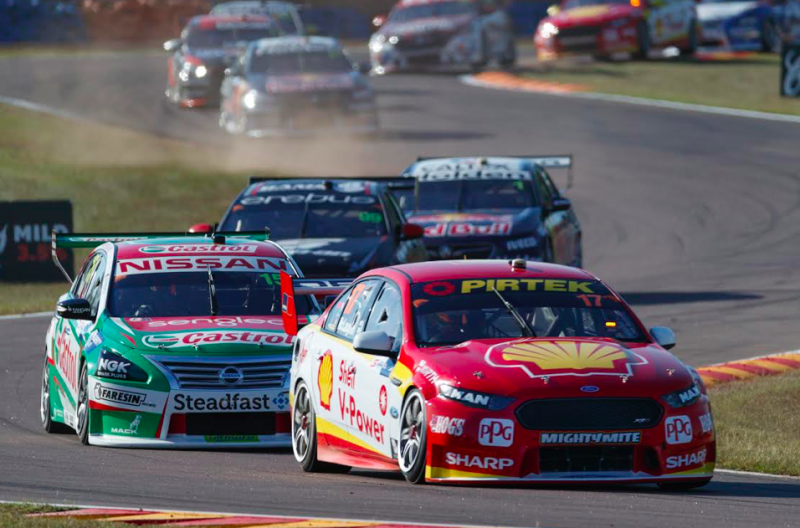 Scott McLaughlin was glad to finish second after battling overheating issues both inside and out of the cockpit that left the championship leader with a ‘pretty torched’ engine at the end of Race 16.

The Shell V-Power Racing driver had to nurse rising oil temperatures that caused an oil surge resulting in smoke pouring from the rear of the car from lap 30 at Darwin’s Hidden Valley Raceway.

Temperatures had begun to rise after a period of laps following Rick Kelly’s Nissan in the battle for second position.

A disconnected helmet fan hose on Lap 2 added to his woes.

The smoke worsened immediately after his second stop before again dying down for the final stages and avoided any attention from the stewards.

It didn’t seem to affect his pace although engineer Ludo Lacroix was forced to coach the Kiwi in dealing with increasing oil temperatures.

McLaughlin was able to bring the car home in second behind eventual race winner David Reynolds to extend his championship lead to 161 points.

“About Lap 2, I lost my helmet fan and then about a couple of laps later it started getting really hot in the engine. So it was all about trying to bring it home from there,” said McLaughlin.

“And I couldn’t sit quite close to people and it was crazy, there was stuff going on everywhere. Overall, second for us, extended the points gap, and it was not a bad thing.

“I had a warning (about the smoke) in the first stint behind Rick. They (the team) told me that everything was fine and then towards the end, they told me to get clear air so I knew something wasn’t quite right.

“And then obviously, coming out of the pits that last time was crazy. It definitely wasn’t tyre smoke, that’s for sure.

“I think the team did a good job in managing the problem, but we absolutely need to look into it because I think that engine was pretty torched.”

However, it is likely the engine will be changed before the championship heads to Townsville from July 6-8.

The squad will investigate the cause of the problem to ensure a repeat does not occur in the future.

“We will definitely be looking to getting permission to take the seals off and check it; we certainly won’t be running it as it has come out of the car,” Story told Speedcafe.com.

“We just need to look at it to make sure it doesn’t happen again.”

Fabian Coulthard earned solid points for the team after bringing his car home in eighth, an improvement on the 15th recorded in Race 15.

Shell V-Power Racing continues to lead the teams’ standings with a 48 point margin over the Red Bull Holden Racing Team.