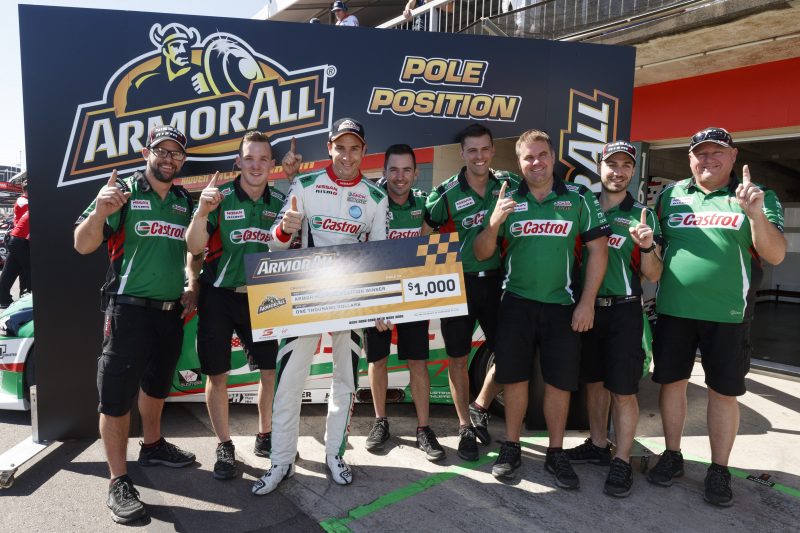 Rick Kelly’s purple patch has continued with the fastest lap in the Armor All Top 10 Shootout for Race 16 of the Supercars season at Hidden Valley.

The #15 Castrol Nissan Altima will start alongside provisional pole-sitter Scott McLaughlin for the second race of the CrownBet Darwin Triple Crown.

Jamie Whincup and David Reynolds, like Kelly, made significant advances and will take up the second row for this afternoon’s 200km race.

Kelly complained of a “long brake pedal” into Turn 1 and was third-fastest to the end of the first sector at the time but finished off his lap well.

Sixth after the earlier 20-minute qualifying session, he is now the sixth different pole-sitter of 2018, exactly 365 days after his last.

“This one is completely unexpected,” said Kelly.

“I thought we did a clean lap, we might have been in the top four but to get pole is massive.

“It was all in Turn 1 for us, cost us a bit of time and Scotty McLaughlin had us nailed there all weekend (but) he just went a little bit deep, cost himself a tenth, and we knew we had a strong second two-thirds of the lap.

“Massive thanks to the crew, yesterday didn’t go so great for us so we’ve got to tune up for the race now and make the most of it.”

McLaughlin (#17 Shell V-Power Racing FGX Falcon) was last to take to the track but was down slightly to the first sector and lost a tenth in the second sector before ending up just 0.0547s adrift.

“I always like to be pole, but we started there (second position) yesterday and won the race,” noted the Virgin Australia Supercars Championship leader.

“(The) car is feeling good, the boys will go to work now and get ready for the race, but congrats to Rick, he did a great job there; (I) just missed out a little bit.”

His second placing means that the Triple Crown will go unclaimed for at least another 12 months.

Whincup’s #1 Red Bull HRT ZB Commodore broke into a small slide as he negotiated Turn 1 but he made that up and more to go faster than then-benchmark Garth Tander.

Reynolds marched all the way from a provisional 10th to fourth with a solid effort on roaded tyres in the #9 Erebus Penrite ZB Commodore.

Garth Tander (#33 Wilson Security ZB Commodore) will start on Percat’s outside as the fastest of four to enter the shootout on used tyres.

Michael Caruso (#23 Drive Altima) shares Row 4 with Fabian Coulthard, who ended up fastest to Sector 1 but then dropped part of the #12 DJR Team Penske FGX Falcon over the edge exiting Turn 5.

James Courtney (#25 Boost Mobile ZB Commodore) and Anton De Pasquale both dropped seven positions from their provisional starting berths and are set to form up Row 5.

De Pasquale was six tenths off the pace having run the #99 Erebus Motorsport ZB Commodore well wide at Turn 1.