Johnson: McLaughlin is the class of the field

Johnson: McLaughlin is the class of the field 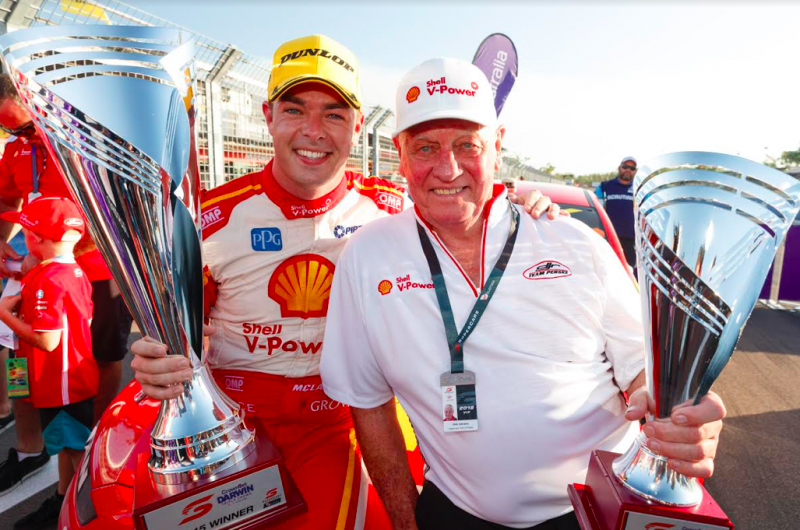 Johnson was on hand at Darwin’s Hidden Valley Raceway on Saturday to witness his driver produce an impressive display to score a sixth victory of the year, and the 100th championship race win for the Dick Johnson Racing moniker.

McLaughlin was made to work hard for the victory in Saturday’s Race 15 having to fend off a charging Shane van Gisbergen (Triple Eight) and David Reynolds (Erebus Motorsport), who were both armed with fresher tyres for the final laps.

The championship leader pitted at the end of lap six while van Gisbergen and Reynolds opted to pit 13 and 15 laps after offering them fresher tyres for the run home.

McLaughlin came under immense pressure from van Gisbergen in particular during the closing stages but was able to preserve his tyres to further his championship lead.

The drive follows a number of impressive performances this season from the Kiwi, including double victories at Phillip Island and Barbagallo Raceway, with the latter featuring a win from 19th on the grid.

“He’s without a doubt the class of the field, to be quite honest,” Johnson told Speedcafe.com.

“There are a couple of very good guys out there as well but Scotty… and it’s not all about him, it’s about what he’s got behind him in the way of the team, because you don’t get anywhere on your own.

“Well he learned a lot last year, he learned to be a lot more patient, and he’s showing an awful lot of the things that he experienced last year, he’s dealing with them in a much smarter way.

“He (McLaughlin) drives smart. He could have gone faster earlier but he knows damn well that if he did that, he’d have trashed the tyres, so he just drives really smart, and he drove to the point where he knew damn well that their tyres would get to a point where they’d fall over and he knew he’d be home from there, and that’s what happened.”

“It was sensational and it’s what we’ve come to expect from him,” Story told Speedcafe.com.

“That was a first-class drive and he deserved that win there and I couldn’t think of a better, more fitting way to win DJR and DJR Team Penske’s 100th championship race win.

“We’re very proud of Scott, he really did us proud.

“He’s driving and doing everything he needs to do at the moment.

“We obviously had a very successful year last year and it didn’t come together in the end; upon reflection there’s a lot of things we could have done differently, and all we can do is learn from the past and that’s certainly what we’re all trying to do at the moment.”

McLaughlin has opened up a 143 point lead in the championship heading into today’s 70 lap Race 16, which is scheduled to start at 1330 local time, 1400 AEST.