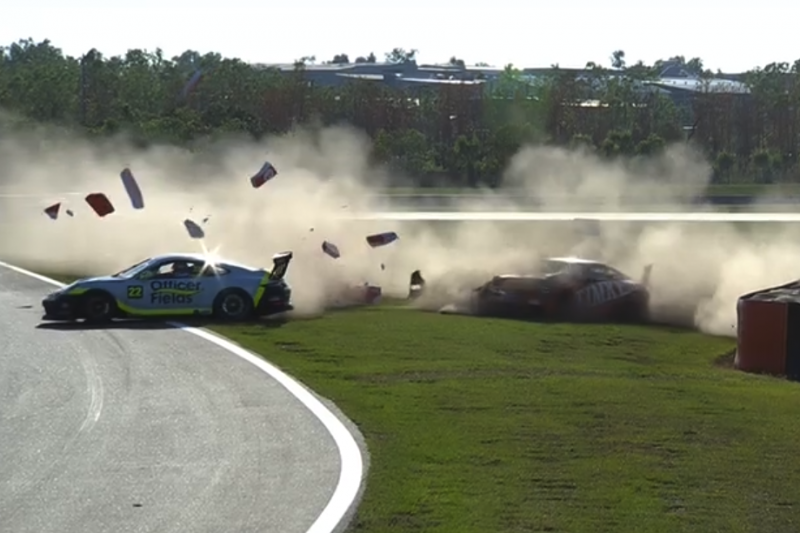 John Steffensen and Dean Cook had a heavy crash in Race 2 of Carrera Cup in Darwin pic: Fox Sports

The McElrea Racing driver found himself out front following a raft of incidents at the beginning of the race, which took out last year’s series winner David Wall as well as Dale Wood.

Pole-sitter and yesterday’s race winner, Wall, stalled at the start on the grid, leaving drivers behind to swerve and avoid his stricken car.

David Wall and Dale Wood came together on the start line

Dylan O’Keeffe, who started the row behind, managed to get around him in one piece, but an unsighted Wood had nowhere to go and clipped rear of Wall’s car.

The incident ripped the right-front wheel from Wood’s machine before he came to rest further on in the lap.

A secondary crash occurred only moments later on the exit of Turn 1 when John Steffensen and Dean Cook came together, sending the former into the tyre barrier heavily.

All drivers emerged from their cars unscathed, with race control deploying the Safety Car in order to recover the damaged cars.

Evans inherited the lead in all the chaos, as the New Zealander led O’Keeffe and James Moffat back to green flag racing on Lap 6.

It wasn’t long though before the Safety Car returned to the circuit after a handful of drivers in the mid-pack tripped over each other when the field condensed in anticipation of the restart.

Nick McBride made heavy contact with the rear of Josh Hunt’s car, the impact taking both out of the race as drivers behind used evasive manoeuvres to avoid getting tangled up in the incident, including Anthony Gilbertson.

Evans once again led the field back to green on Lap 9 ahead of a one-lap dash to a time-certain finish.

He held off O’Keeffe right to the chequered flag in front of Moffat, Jordan Love and Michael Almond who completed the top five.

Cameron Hill crossed the line sixth, while Adrian Flack took out the Pro-Am class in seventh outright ahead of Glen Wood and second in Pro-Am (ninth outright), Stephen Grove.

The Carrera Cup field will return to the track at 1200 local time/1230pm AEST for their final race of the weekend, set to take place over 35 laps.