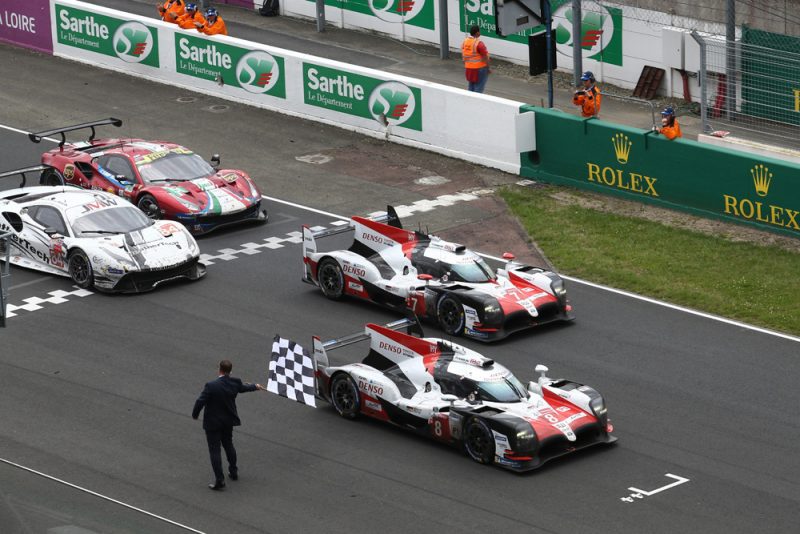 Fernando Alonso and Matt Campbell have won the 24 Hours of Le Mans with Toyota and Porsche respectively after dominant performances throughout the race.

Toyota led every lap, the Alonso, Kazuki Nakajima, and Sebastien Buemi entry emerging victorious after the team’s two cars ran on the same lap until the final hour.

A mistake from Kamui Kobayashi ended the #7 car’s chances when he missed the pit entry.

Running low on fuel, the Japanese driver was forced to limp for half a lap to ensure he could make it back to the pits.

The mistake saw the Kobayashi, Jose Maria Lopez, and Mike Conway car fall from the lead lap, all but handing the race to the sister car.

There was further salt rubbed into the wound when the error meant the car ran beyond the maximum allowed stint length, which resulted in a stop-go penalty.

In the #7 car at the finish, Nakajima finally saw the flag as a winner after he was forced to climb from the car having led at the start of the final lap two years ago.

Toyota also became the first Japanese manufacturer to win the 24 Hours of Le Mans since Mazda in 1991.

Rounding out the LMP1 podium was the #3 Rebellion Racing entry, which ended the race 12 laps off the leading Toyota. 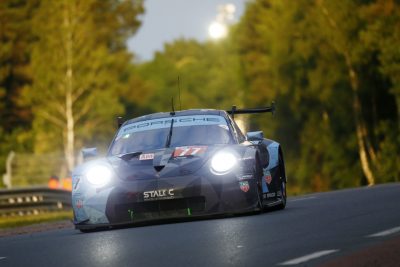 The LMGTE-Am class went to Porsche, with Matt Campbell a star performer as he led the #77 Dempsey – Proton Racing entry to victory on his debut in the 24 Hours of Le Mans.

Co-driving with Christian Ried and Julien Andlauer, a faultless performance from the Porsche 911 RSR saw the trio ease to the class victory by more than a lap from the Ferrari 488 of Giancarlo Fisichella, Thomas Flohr, and Francesco Castellacci.

Such was the performance by the #77 entry that the trio ended the race inside the top 30 in the overall classifications.

Completing the LMGTE-Am class podium was the Keating Motorsports Ferrari, almost two minutes away from the Fisichella car.

Heading the LMP2 class was the #26 G-Drive entry which had dominated the class for much of the race.

The second G-Drive car, which included Australian James Allen, crashed out of the race on Sunday morning with Jose Gutierrez at the wheel.

Second in class was the #36 Signatech Alpine Matmut entry ahead of the #39 Graff-SO24 car.

The #92 headed the sister car home for a Porsche 1-2, though not before a thrilling battle between Frederic Makowiecki and Sebastien Bourdais in the Chip Ganassi Ford GT.

The pair swapped positions and ran door to door for much of the morning, the Porsche driver employing some aggressive defensive tactics which drew the ire of Bourdais.

Stewards investigated the duel though deemed no action was warranted.

In the end, the Bourdais, Dirk Mueller, and Joey Hand entry rounded out the LMGTE-Pro podium, while team-mates Ryan Briscoe, Scott Dixon, and Richard Westbrook fell to 14th at the flag, the lowest placed of the four Chip Ganassi entries home.

The success for Alonso sees the Spaniard join an exclusive club.

Aside from his pursuit of the sport’s unofficial ‘triple crown’ which consists of victory in the Monaco Grand Prix, 24 Hours of Le Mans, and Indianapolis 500, Alonso became just the fifth driver to win Le Mans and a Formula 1 world championship.

Only Graham Hill, Jochen Rindt, Phil Hill, and Mike Hawthorn had previously managed the feat, Graham Hill the most recent with his Le Mans win in 1972.