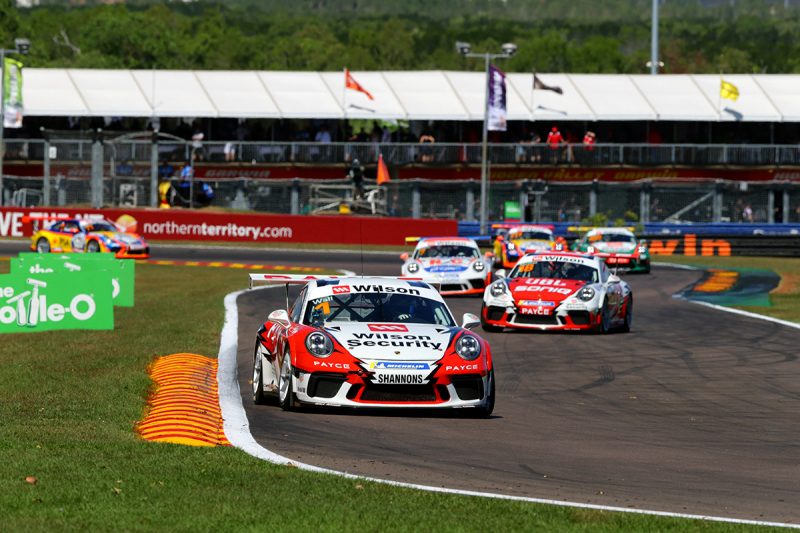 Leading from start to finish, Wall headed home points leader Jaxon Evans by just over a second at the line, while Dylan O’Keeffe inherited third for the 18-lap race.

Wall got the jump off pole and led cleanly down to the first corner ahead of Nick McBride and Dale Wood.

A fast starting Evans slipped into third on Lap 2 when both Wood and O’Keeffe banged doors at Turn 6.

Evans then found himself second when McBride ran wide at Turn 1 on Lap 4 and dropped a position.

The change for the lead in the Pro-Am class came on Lap 13 as Adrian Flack put a move up the inside of pole-sitter Stephen Grove under brakes for Turn 1.

McBride had a lock up at the same corner a lap later and went off the road, falling from third to seventh and going wheel to wheel with Cameron Hill as he rejoined the circuit, before the latter eventually prevailed.

Up front however, Wall slowly stretched out his lead with a commanding performance, taking the win comfortably in front of Evans.

O’Keeffe crossed the line third, ahead of James Moffat and Wood who rounded out the top five.

Hill finished sixth, while a recovering McBride managed to retain seventh ahead of Jordan Love.

The only retirements were Greg Taylor and Marc Cini, who came together at the start after the former stalled on the grid.