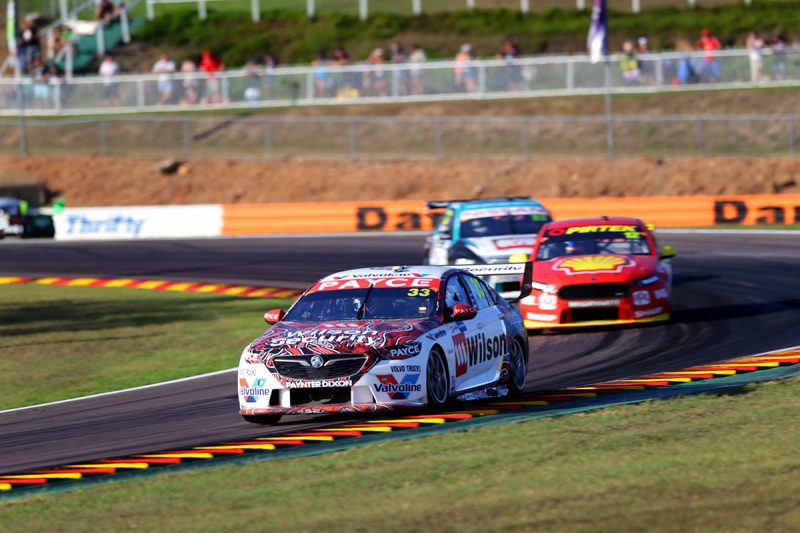 Garth Tander has described the pace of his GRM Commodore as ‘unbelievable’ on worn rubber having hauled his way from 13th to finish fifth in Race 15 in Darwin.

Tander turned out to be one of the stars of the race, gaining five positions after his Lap 32 pit stop when he was the quickest driver on track.

His victims included Jamie Whincup, Craig Lowndes, and then Rick Kelly, despite the latter remaining an obstacle for the former two all the way from their Lap 5 pit stops until the chequered flag.

While Tander might have also run down Scott Pye for fourth had the race lasted another two to three laps, he was most impressed with the pace out of the #33 Wilson Security machine so deep into the stint.

Will Davison pitted on the same lap as Tander and Michael Caruso one later, while Reynolds and Pye were the last of the other front-runners when they took service 11 laps earlier.

Despite the kilometres in his first tyre set at the notorious Hidden Valley Raceway, the veteran managed to circulate mostly under 1:08.5s per lap before fresh rubber saw him run a second or more faster than those around him.

“We didn’t really predict the consistency in the strategy meeting we had before the race,” said Tander.

“The thing was unbelievable in the middle part of the race, it was just eight-four (1:08.4s), we were locked on eight-four and the boys kept telling me ‘Just keep doing that for as long as you can because it’s working for us.’

“(I) stopped really late, had a bit of a charge at the end but couldn’t quite get to Scotty Pye. Really happy with that, the car was really fantastic throughout the race.”

Tander also revealed that the team had intended for him to run an approximately ‘even tyre’ strategy before his lap speed prompted a rethink in the Garry Rogers Motorsport garages.

“The original plan was just go past halfway, so we went a fair way past that,” recounted the three-time Bathurst 1000 winner.

“Crusty (engineer Richard Hollway) called me up and asked ‘Do you reckon we’ll go past halfway?’

“I said, ‘Yep, no problems’ and then it was just after that – I’m sure he just was monitoring the sectors – he called me up and said ‘Two or three more.’

“We found a bit more speed, but there probably weren’t many laps left in it.

“Great strategy by the guys, really good job. Car was fantastic, good pit stop, car is straight, so we’ll try and tune her up a bit more for qualifying tomorrow and try and start a bit closer to the front.”

The finish was Tander’s second-best of the season, the first a podium way back in Race 2 at the Adelaide 500, and sees him move up one position to 13th in the Virgin Australia Supercars Championship.