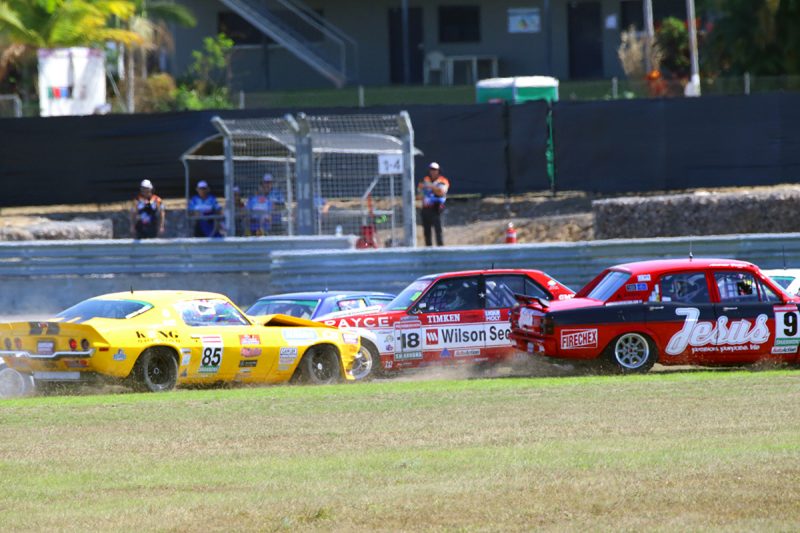 Steve Johnson racked up another win as a wounded John Bowe finished seventh in Race 10 of the Touring Car Masters season at the CrownBet Darwin Triple Crown.

Johnson showed a clean pair of heels from pole but Bowe was spun by Andrew Fisher (XY Falcon) in a first-corner chain reaction.

Fisher had taken a touch from Jason Gomersall, who was up on the ripple strip as the field negotiated the left-hander. 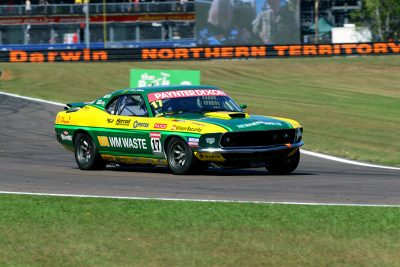 Mark King made head-on contact with Bowe’s Torana on the outside of the bend but both managed to persevere with damage.

Adam Bressington (Camaro) finished 0.41s behind Johnson’s Mustang in second having passed Gomersall after the restart.

Gomersall and his Torana were third to take the chequered flag, ahead of Bruce Williams and Jim Richards (Falcon Sprint).

It was a better Trophy Race for King, who won that affair having powered his Camaro past then-leader Williams’ Torana along the main straight with two laps remaining.

King had gained four positions a lap earlier when he blazed down the outside at a restart, the Safety Car period caused when Ian Woodward (Camaro) spun and became beached at Turn 10. 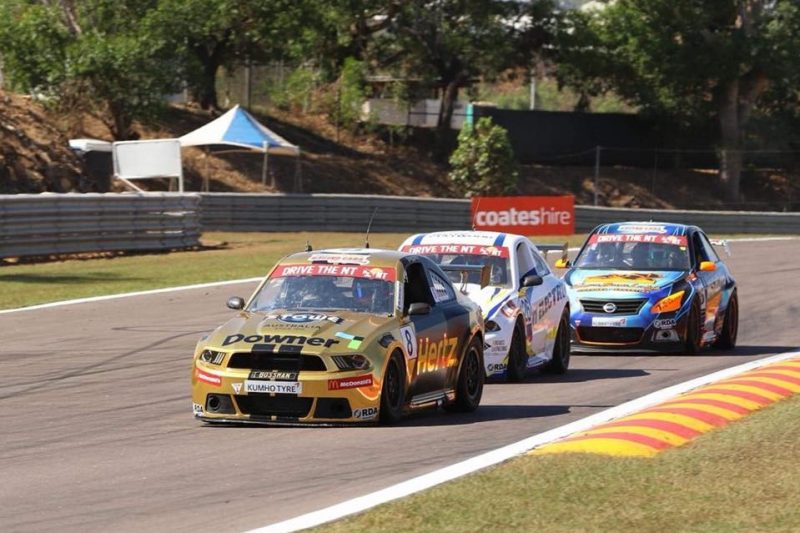 Justin Ruggier has prevailed in thrilling battles for the win in each of the first two races of the Drive the NT Challenge.

The pole-sitter had a near race-long stoush with Aussie Racing Cars debutant Bryce Fullwood and Joel Heinrich in the opener.

Fullwood in fact reset the lap record but gave up the lead for good when he broke into a slide as Ruggier went around the outside on the penultimate lap.

Ironically, Ruggier skipped away to a two-second win when Fullwood and Heinrich got into another battle which ended up being settled in favour of the former by just 0.0321s.

Paul Morris shot from fourth on the grid, where he finished Race 1, to head the field through Turn 1 at the start of Race 2.

Fullwood took over the lead with a wild three-wide moment also involving Ruggier a lap later, which invited Heinrich into the battle for the first time.

Ruggier ended up beating Fullwood to victory by 0.18s, with Heinrich another 0.46s back.

The BMW E30 driver headed home pole-sitter Tim Playford (Mazda 808) in Race 1, who dropped back after a slow start to cross the line second ahead of Mick Uebergang (Mazda 808) in third.

Race 2 once again went the way of Braune, with Uebergang and Playford swapping around to finish second and third respectively.

There were identical class winners in each race with Commodore Cup going to Bryce Fullwood (eighth and seventh outright), IP Under 2L to Craig Wright (Ford Escort Mk 1, 11th and ninth outright), and HQs to Duane Cambridge (19th and 20th outright).